All Cats Have Asperger Syndrome by Kathy Hoopmann

All Cats Have Asperger Syndrome by Kathy Hoopmann
Happy World Autism Awareness Day!
And to celebrate, here is a book that does a great job explaining Asperger Syndrome.
For anyone who knows someone on the autism spectrum 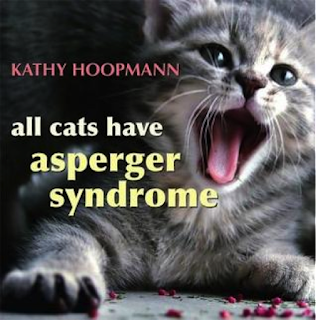 ‘All Cats have Asperger Syndrome’ is told in a way everyone can understand with pictures that will make you smile.
For someone who grew up with autism, this book does a great job explaining what it’s like to have autism.
I hate it when people talk about autism like it’s something to be afraid of. Like on one episode of ‘Girl Meets World’ one of the characters was thought to have Asperger Syndrome and they made it sound like this horrible thing.  Having a kid with autism is not the end of the world. Another show that did a great job explaining Asperger Syndrome was on an episode of ‘Arthur’ (When Carl Met George). The episode did a great job of explaining what it’s like for someone to live with autism in a way people can understand.
The thing about autism is no one with autism is the same, just like everyone on earth, no two are alike. So if you’ve met one person with autism, you’ve met one person with autism. No two are alike. Each individual with autism have their own quirks and own way of dealing with their problems.
With that said, here is a quote about autism.
“What would happen if the autism gene was eliminated from the gene pool? You would have a bunch of people standing around in a cave, chatting and socializing and not getting anything done.” – Temple Grandin, The Way I See It: A Personal Look at Autism & Asperger’s
This is very true.
0 Comments
0 Likes

Henry and Mudge the Series by Cynthia Rylant