All Rise for the Honorable Perry T. Cook by Leslie Connor

All Rise for the Honorable Perry T. Cook by Leslie Connor
Age 8 and Up 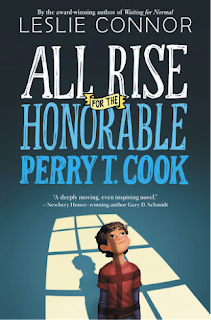 This book tells the story of 11-year-old Perry, who was born and raised by his mom at the Blue River Co-ed Correctional Facility in tiny Surprise, Nebraska. His mom is a resident on Cell Block C, and so far Warden Daugherty has made is possible for them to be together. That is, until a new district attorney, Thomas Vanleer, discovers the truth – and Perry is removed from the facility and forced into a foster home.
When Perry moves to the “outside” world, he feels trapped. Desperate to be reunited with his mom, Perry goes on a quest for answers about her past crime.
When I read the summary for this book, my first thought was ‘how can a kid live at a jail?’ Let’s get one thing start before you read this book. The Blue River Co-Ed Correctional Facility isn’t your typical idea of a jail. When you think of jails you might think of the ones you’ve seen in cartoons or on crime films; over embellished with the inmates wearing black and white striped prison uniforms or fights breaking out. The jail in the book is like a G-rated version. The inmates are still locked behind bars and they have to eat with sporks but no one is trying to hurt anyone else.
The one thing I didn’t understand was that the Mom and the other inmates could work at Blue River and get a small pay. I don’t know what they are doing for work or how that all works out and I’m not even sure if that happens in real life.
Thomas Vanleer is the district attorney who comes in and ruins things for Perry and his mom. I believe the man thinks he is doing the right thing and he tries to be nice to everyone but he just comes off as being a blowhard and a jerk. The thing that really bugs me is that Vanleer seems to want immediate gratitude from Perry for getting him out of Blue River. Does he really expect a thank you for taking him from the only place he’s ever called home?
This book asks another important question, ‘What is home?’ The Vanleer guy wants Perry to think of his house as home and not the prison. But a home isn’t just a place where you’re safe from harm and have good food to eat, home isn’t home without the people you love.
0 Comments
0 Likes

How to Speak Dolphin by Ginny Rorby