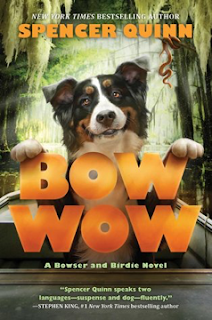 A bull shark in the swamp? No one in the Louisiana town of St. Roch believes it at first, but when a local boy has a face-to-face encounter with the toothy monster, every big fisherman is called out for the hunt. There’s a big cash bounty on the shark.
Sharp-eyed Birdie Gaux and her handsome dog Bowser can’t help noticing that shark fever is causing some shady doings in town. For instance, where is Snoozy, the clerk who works at the Gaux family fishing store? He’s the town’s best fisherman, but suddenly he’s missing. Is a rival bounty hunter behind Snoozy’s suspicious disappearance? Or perhaps the marine biologist who said he’ll do anything to keep the shark alive?
Birdie and Bowser are determined to find Snoozy and bring him home safe, but the job is more dangerous than they know. Bowser better practice his paddling: He and Birdie are heading for deep waters . . .
This book snuck up on me. Which is kind of weird because I keep an eye out for new books. I only learned about it when I was looking on Overdrive and found the audiobook.
I think this story was based on the Shark Attacks of 1916, I Survived did a book on the subject. It was said that the shark in question was most likely a bull shark, the most aggressive shark in the world.
For more of a review on the Bowser and Birdie series, check out Review #39, date September 3, 2016
I don’t know if Spencer Quinn will write another book for this series mostly because he’s already done Woof, Arf, and Bow Wow. What other dog sounds could he do? And now that I’m thinking about it, he might do Bark next.
0 Comments
0 Likes

Laughing at my Nightmare by Shane Burcaw

The Journey Trilogy by Aaron Becker