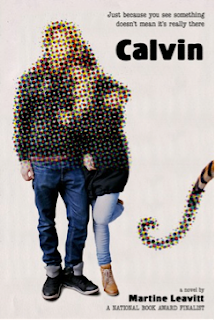 As a child, Calvin felt a connection with the comic book character from Bill Watterson’s Calvin & Hobbes. He was born on the day the last strip was published; his grandpa left a stuffed tiger named Hobbes in his crib; and he even had a best friend named Susie. Then Calvin’s mom washed Hobbes to death, Susie grew up beautiful and stopped talking to him, and Calvin pretty much forgot about the strip – until now.
Now he is 17-years-old and had been diagnosed with schizophrenia. Hobbes is back, as a delusion, and Calvin can’t control him. Calvin decides that Watterson is the key to everything – if he would just make one more comic strip, but without Hobbes, Calvin would be cured. Calvin and Susie (is she real?) and Hobbes (he can’t be real, can he?) set out on a dangerous trek across frozen Lake Erie to track down Watterson.
When I found this book at the library, I practically jumped with joy. I thought Bill Watterson had written a book about a teenaged Calvin & Hobbes. Then I was immediately disappointed when I read that this was a story about someone who thought they were Calvin. But I had to keep reminding myself that this Calvin wasn’t the Calvin.
I owe a lot to the Calvin & Hobbes comics. They were what got me into drawing in the first place. When I was in fifth grade, the boy who sat next to me was almost always reading one of the big Calvin & Hobbes comic books. I would lean over to try to read the comics but I was on his left side and I could never see the ending of the comics. After a while I found the comics at the library and was hooked.
Schizophrenia (to me) seems pretty scary. For those who have delusions, you never know if the person you’re talking to is real or if it’s all in your head. I first found out about schizophrenia from a TV show called ‘Perception’. It’s about Dr. Daniel Pierce, a talented but eccentric neuropsychiatrist, who is enlisted by the FBI to assist in solving complex cases in Chicago. Daniel has paranoid schizophrenia and his hallucinations sometimes help him to pick out subtle clues in solving crimes. This was my favorite part of the show because his hallucinations were so funny. One time he hallucinated the devil and the devil made a joke about how many lawyers were in hell. He said, “You can’t throw a rock without hitting one. Actually that’s a game we play down there.” That was one of my favorite hallucinations. I’ve always liked shows about people with hallucinations or can see someone that no one else can see. I find it strangely amusing watching someone talk to thin air.
I don’t know if this book or the show ‘Perception’ are being truthful about the facts on schizophrenia. I read two other books about characters with schizophrenia that probably are more factual but I don’t know when or if I’ll review those books.

This is one of my favorite comics. I even did my own version with my own characters.
0 Comments
0 Likes