Fish In A Tree by Lynda Mullaly Hunt
8 and Up 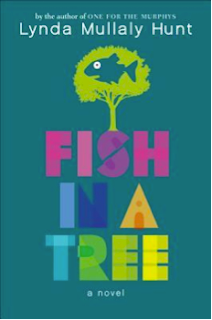 Ally has been smart enough to fool a lot of smart people. Every time she lands in a new school, she’s able to hide her inability to read by creating yet disruptive
distraction. She’s too scared to ask for help; after all how can you cure dumb?
However, her newest teacher Mr. Daniels sees the smart, creative kid underneath the troublemaker. With his help, Ally learns not to be so hard on herself and that dyslexia is nothing to be ashamed of.
Ally soon discovers that there’s more to her – and to everyone – than a label, and that great minds don’t always think alike.
This is the type of book that teachers should be giving out to read. Not ‘Island of the Blue Dolphins’ or ‘To Kill A Mockingbird’. I’m not saying those aren’t good books (Except ‘Island of the Blue Dolphins’. That book scared me half to death as a child) but they’re kind of out of date and we don’t really relate to the characters. Ally is a character that anyone who has ever thought that something was wrong with them can relate too.
This poor girl thinks she’s too dumb to read and she’s too scared to even ask for help. I know I was scared to ask for help as a child. A majority of my teachers weren’t very nice and/or not willing to help. I had a guidance counselor who was nice to me but that was about it. If you’re lucky enough to have a teacher who actually cares, good for you.
My biggest question is how no one, not the teachers or her parents, realized she couldn’t read until she was in sixth grade. Then again I didn’t start getting help with my autism until sixth grade and that was only after I had a little scene. People really need to pay more attention.
I’m happy that teachers now a days are being taught how to handle children with learning differences. Anyone who thinks that there’s only one way to teach a child is an idiot.
Everyone is smart in different ways. Anyone who thinks there is only one type of smart is an idiot. Ally might have trouble readying but she’s an amazing artist. I love her ideas for drawings they are so creative. She sees her more imaginative thoughts like movies in her head and she sees them so clearly and gets lost in them. My thoughts are in picture form too but it’s like looking though a cloudy piece of glass, I can kind of see stuff but not really.
This book shows that we all have our weaknesses but we all have our strengths. Don’t let your weaknesses bring you down. Fight through them and come out on top.
1 Comment
0 Likes

A Handful of Stars by Cynthia Lord

Bathing All Over the Globe: Around the World in a Bathtub by Wade Bradford