PrevPrevious Book ReviewWhat To Do With A Box by Jane Yolen & Chris Sheban
Next Book Review‘I Survived’ Series, Books 8 – 14 by Lauren TarshisNext

The ‘I Survived’ Series is a brilliant way of showing readers that kids like them lived and survived these disasters. This series is a work of historical fiction; all the characters come from the author’s imagination, but the main events, places, and feelings of terror are real. The thing I love the most about these books are the facts about the disasters: Examples are shown below. 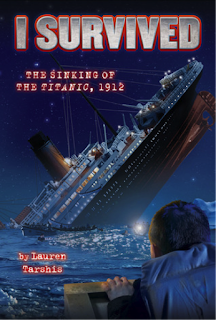 George Calder and his little sister, Phoebe, are sailing with their aunt on the Titanic, the greatest ship ever built. He can’t resist exploring every inch of the incredible boat, even if it keeps getting him into trouble. Then the impossible happens – the Titanic hits an iceberg, and George is stranded on the sinking ship.

While reading this story, I was in pain every time the characters talked about how unsinkable the Titanic was. The only good thing to come out of this horrible disaster was that laws were changed to require all ships to carry enough lifeboats for every passenger and crewmembers.

Interesting Fact: The Titanic was located in 1985 by a team led by U.S. scientist Robert Ballard. He didn’t take anything from the wreck because he believed the Titanic should rest in peace as a memorial to those who died. I agree with him. Why tempt fate? 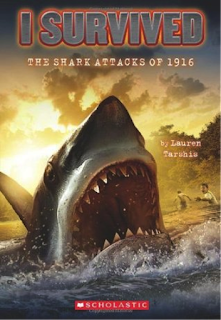 Chet is finally feeling at home in Elm Hills, New Jersey. He has a job with his Uncle Jerry at the local diner, three friends, and the perfect summertime destination; cool, refreshing Matawan Creek. But his summer is interrupted by shocking news; a great white shark has been attacking swimmers along the Jersey shore, not far from Elm Hills. When Chet sees something in the creek, he’s sure it’s his imagination until he comes face-to-face with a bloodthirsty shark!

This is one of my favorites because it’s about an event I had never heard of until now. I feel like this event was what the movie ‘Jaws,’ ‘Sharknado,’ and pretty much every shark movie are based on.

Interesting Fact: Every year, humans kill nearly 100 million sharks, mainly for their fins, which are a prized ingredient for shark fin soup. The way I see it, sharks have more of a reason to fear us. 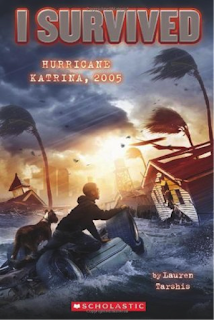 Barry’s family tries to evacuate before Hurricane Katrina hits their home in New Orleans. But when his little sister gets terribly sick, they’re forced to stay home and wait out the storm. At first, Katrina doesn’t seem to be as severe a storm as forecasters predicted. But overnight, the levees break, and Barry’s world is literally torn apart.

Nobody believed that the storm was going to be that bad. There were a lot of false alarms over the years, predictions that never came true. But then the worse finally happened, and it was too late for everyone to get out.

Interesting Fact: Americans donated more than $1 million to the victims of Hurricane Katrina. 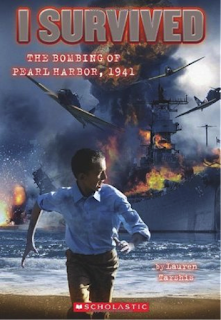 Ever since Danny’s mom moved him to Hawaii, away from the dangerous streets of New York City, Danny has been planning to go back. On the morning he plans to stow away on the next ship out of Pearl Harbor, the skies fill with fighter planes. Bombs pound the harbor. Bullets rain down on the beaches. Danny is a tough city kid, but for the first time, he is truly afraid.

These books are pretty scary to begin with, but this one was terrifying. I felt more for the characters in this story than the others. You can almost feel the fear coming off the page. Danny is only thinking about himself initially, but when the planes come, he immediately changes his attitude and does everything he can to help.

The irony is that Danny’s mother moved them to Hawaii because she thought New York was too dangerous. Boy, was she wrong.

Interesting Fact: President Roosevelt said that December 7th, 1941, would “live in infamy,” meaning it would always be a day that great evil was committed. 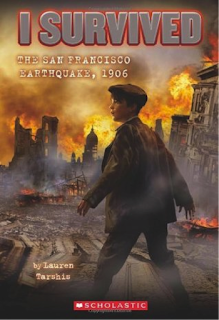 Leo loves being a newsboy in San Francisco – he needs the money, but the job also gives him the freedom to explore the amazing city. But early one spring morning, Leo’s world is shaken – literally – and he finds himself stranded in the middle of San Francisco as it crumbles and burns to the ground.

Leo was a lot smarter than the boys in the other books (Book #1’s main character, for example). I love how he used his dad’s stories to help guide him out of trouble.

Interesting Fact: There were no instruments to measure earthquakes back in 1906, but experts estimate that the San Francisco earthquake would have measured 7.9 on the moment magnitude scale (MMS). 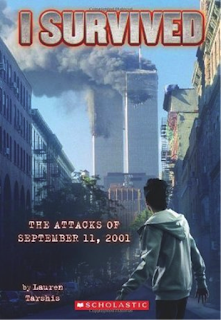 The only thing Lucas loves more than football is his dad’s friend Benny, a firefighter and the man who taught Lucas how to play. So when Lucas’s parents decide football is too dangerous and he needs to quit, Lucas has to talk to Benny. Lucas takes the train to the city instead of the bus to school, but just as he arrives at the firehouse, everything changes . . . and nothing will ever be the same again.

I was in kindergarten when this happened, and my mom worked for the airlines, so my parents never told me what happened that day so I wouldn’t be scared to fly. I didn’t find out about that day until I was much older. Let’s just say I didn’t really pay much attention to the world around me as a child.

Interesting Fact: On September 11th at 9:42 a.m., the United States airspace was shut down. No planes were allowed to take off, and all aircrafts in flight were ordered to land at the nearest airport. 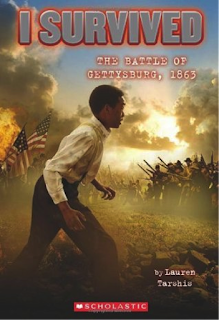 Thomas and his little sister, Birdie, have fled the farm where they were born and raised as slaves. They soon cross paths with Corporal Henry Green, a Union soldier, who brings them back to his regiment. Suddenly it feels like they’ve found a new home, and they don’t have to find their way north alone – they’re marching with the army. But then the men are called to battle in Pennsylvania. Thomas has made it so far, but does he have what it takes to survive Gettysburg?

This was such a sad time. Before Abraham Lincoln, no president dared to stand up and say that slavery was wrong. The North’s reason for fighting was honorable: they wanted to free the slaves. But the South really didn’t think it was wrong and refused to change their ways. Some people thought the war would be over in a week, but it went on for 4 years, and way too many people lost their lives.

Interesting Fact: The Battle of Gettysburg was not the end of the war as some may think, but it was the turning point for the North.

PrevPrevious Book ReviewWhat To Do With A Box by Jane Yolen & Chris Sheban
Next Book Review‘I Survived’ Series, Books 8 – 14 by Lauren TarshisNext