I Will Always Write Back: How One Letter Changed Two Lives by Caitlin Alifirenka & Martin Ganda

I Will Always Write Back: How One Letter Changed Two Lives by Caitlin Alifirenka & Martin Ganda 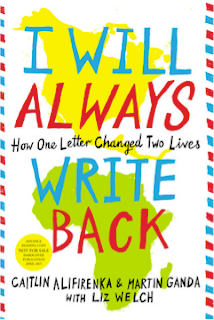 The true story of an all-American girl and a boy from an impoverished city in Zimbabwe and the letter that changed both of their lives forever.
It started as a 7th grade assignment. Everyone in Caitlin’s class wrote to an unknown student somewhere in a distant place. All the other kids picked countries like France or Germany, but when Caitlin saw Zimbabwe written on the board, it sounded like the most exotic place she had ever heard of – so she chose it.
Martin was lucky to even receive a pen pal letter. There were only 10 letters, and forty kids in his class. But he was the top student, so he got the first one.
That letter was the beginning of a correspondence that spanned 6 years and changed two lives. In this compelling dual memoir, Caitlin and Martin recount how they became best friends – and better people – through their long-distance exchange. Their story will inspire readers to look beyond their own lives and wonder about the world at large.
This story takes place between the years 1997 to 2003. They first started sending letters when Caitlin was 12 and Martin was 14. This story shows what true friendship and true kindness is. The friendship between Caitlin and Martin is amazing and inspiring. Every generous gesture from Caitlin and every kind word from Martin fills my heart with happiness that true friendship exists in the real world.
Caitlin is your normal American girl, a character I’ve read about many times. She’s obsessed with boys and pays too much attention on how she looks for a good part of the book. She still has a lot of growing up to do. Caitlin is naïve to Martin’s life situation for a good part of the story. It’s not really her fault because Martin doesn’t tell her straight out. It’s hinted to her quite a bit but she doesn’t catch the hints.
If you want an example on how Martin lives, watch the movie ‘Queen of Katwe’ and you’ll get a good idea. Martin’s family is desperately poor. They live in one of Zimbabwe’s worst slums and shares one room with another family, a mattress  their only furniture. The way people live in Zimbabwe is horrifying and confusing and I could go on and on about how horrible life is like over their so you’ll just have to read the book or watch ‘Queen of Katwe’ to see what I mean.
This next part gives away a lot of the story but I have to say it. When Caitlin realizes what Martin’s life is like she does everything possible to help him. She even gets her whole family involved. Her family starts sending money, care packages and helps Martin find a scholarship in the United States. My favorite part of this whole story is Martin’s family’s reaction to all the things given to them. They don’t think of this as charity or as pity help like a lot of people in the books I’ve read do. They see Caitlin as their angel and are extremely grateful for everything she’s done for them.
I honestly don’t know if I could have written to a pen pal in a far away land in 7th grade. I was going through some major anxiety at the time and everything scared me, wither it was something mundane or extremely stressful. Now that I’m older and calmer, having a pen pal sounds pretty cool. I feel like if I had read this book back in middle school, it might have motivated me into having one (Example: the only reason my family went salmon fishing is because we saw it on Magic School Bus). I’d probably want a pen pal from either the Philippines or Australia. The Philippines because that’s where my dad is from and I’d like to know how kids life are like over there and Australia because it sounds like a cool place and I’d want to ask them if they’ve ever seen a kangaroo or a koala up close.
This book proves that people can change people for the better and should be mandatory middle school reading.
0 Comments
0 Likes

Stanley Will Probably Be Fine by Sally J. Pla