Lunatics by Dave Barry and Alan Zweibel
WARNING!! Rated R for strong language!
If you get offended easily, DON’T READ THIS BOOK! 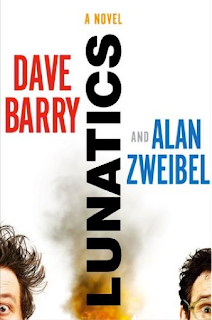 Philip Horkman is a happy man – the owner of a pet store call The Wine Shop, and on Sundays a referee for kids’ soccer. Jeffrey Peckerman is the sole sane person in a world filled with goddamned jerks and morons, and he’s having a really bad day. The two of them are about to collide in a swiftly escalating series of events that will send them running for their lives, pursued by the police, soldiers, terrorists, subversives, bears, revolutionaries, pirates, a black ops team that does not exist – I repeat, does not exist – and a terrorist dressed as Chuck E. Cheese.
Where that all takes them you can’t begin to guess.
I thought “Grasshopper Jungle” was a crazy book but this is 10 times more insane! And that’s saying something because that book had 6-foot-tall man eating grasshoppers. The way Dave Barry and Alan Zweibel switch from one crazy situation after another is hysterical.
Jeffery Puckerman is by far the more interesting character even if everything he says is a racial stereotype. It’s almost impressive how he is able to insult every ethnic group in the world in just one book. This man is either extremely racist or just plain stupid. Philip Horkman seems like the voice of reason in the beginning but as the story goes on he turns out to be almost as insane as Puckerman.
Everyone thinks these guys are masterminds but Puckerman and Horkman get through all of this craziness using plain dumb luck. I don’t know who’s dumber; these two or the people these two meet along the way. This book shows just how stupid humans can be.
I listened to this book on audiobook on a road trip with my parents. It was a bit awkward but I’m glad I listened to this book with them instead of ‘Grasshopper Jungle’. I love listening to funny books with my parents. My mom has the best laugh and my dad has silent laugh but sometimes sound comes out and it’s always a treat. I’ve never heard my dad laugh so hard in his life. I spent a majority of this book shaking my head and laughing my butt off at all the insane things these two do in this story.
If you like insane stories where things just keep getting worse and worse or if you’re a fan of ‘Dumb and Dumber’, this is the book for you.
0 Comments
1 Likes

The Wolf Keepers by Elise Broach

The Name Jar by Yangsook Choi