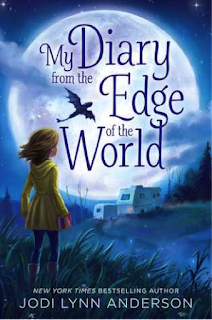 Gracie Lockwood is a twelve-year-old spirited girl, living in a world where sasquatches, dragons, giants and mermaids are common. When a Dark Cloud comes looking for her little brother, her parents pack the family into a used Winnebago and set out on an epic search for a safe place that most people say doesn’t exist: the Extraordinary World, a world very similar to our world.
This book answers the question “What would the world be like if everything magical and mythical were real?” This world is so full of wonder and amazing creatures, a world that people would dream of going to in most books but to the people in this book it’s all just normal.
This author has created such a magical world with so much detail it’s insane. She really came up with everything.
This world is so much different from ours and it’s like a weird dimensional version of our world. It kind of reminds me a something said on the show ‘The Flash” on
The CW, about the theory of the multiverse. The theory is that there are multiple versions of the earth, like one where John F. Kennedy was never assassinated or one where we’re all evil. Or in the case of this book there are many things are different. All the creatures and monsters beyond our wildest imagination are all just a part of everyday life. And our earth is the fantasy. How weird is that?
The weirdest thing is all of the product placements. Seriously they mention almost every snack food and fast food restaurant you can think of.
0 Comments
0 Likes

The Rhino in Right Field by Stacy Dekeyser