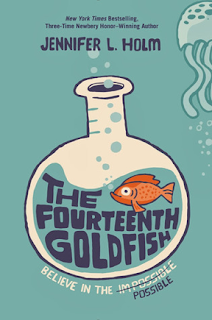 11-year-old Ellie has never liked change. She misses fifth grade. She misses her old best friend. She even misses her dearly departed goldfish.
Then one day a strange boy shows up. He’s bossy. He’s cranky. And weirdly enough…he looks at lot like Elli’s grandfather, a scientist who’s always been slightly obsessed with immortality. Could this pimply boy really be Grandpa Melvin? Has he finally found the secret to eternal youth?
I would love it if my grandpa came back as a teenager. He died years ago and I really miss him. He was so funny and he did everything. He was always moving, doing every sport and activity. The thing I loved most about him was that he would say the funniest things. The man had no censor. Here are a few of my favorite grandpa quotes:
What he once said to a couple with a baby. “Oh, what a cute baby. For such ugly parents.”
Once walked up to someone in a restaurant and said, “Hey. You’re somebody, right?”
And my personal favorite, what he said the first time my family took him out for Chinese food. “I liked it but I never want to eat it again.” (I still use this
one when I liked something, but don’t want to do it ever again.
I wish someone would make a sitcom on the concept of an old person turning back into a kid. I’d watch it.
Ellie’s grandfather was researching a jellyfish that, in the simplest term, is immortal. When I first read this book, I didn’t believe it. But then I saw an
episode of Wild Kratts that featured the Turritopsis dohrnill, the immortal jellyfish. The jellyfish pretty much goes through a never-ending life cycle, regeneration if you will. Pretty cool huh?
This is just me talking but I think immortality would be a curse rather than a blessing. You would outlive everyone you love. What would be the good in that? That’s something that didn’t register to Grandpa Melvin. That he would have to start his life all over again.
0 Comments
0 Likes

I Am Princess X by Cherie Priest