‘Captain Underpants’ Series by Dav Pilkey
2nd Grade and Up

This series revolves around two 4th graders, George Beard and Harold Hutchins, living in Piqua, Ohio, and Captain Underpants, a superhero from one of the boys’ homemade comic books, that accidentally becomes real when George and Harold hypnotize their ill-tempered principal, Mr. Krupp.
Join the boys as they battle – talking toilets, cafeteria ladies from outer space, poorly named professors, bionic booger boys and many other hilarious creations beyond your wieldiest imagination.
I have fond memories of George, Harold and Capitan Underpants as a child. Every boy in my 2nd grade class was reading them at the time. It’s the only thing I remember about 2nd grade: Boys reading Captain Underpants and flipping their eyelids up and grossing out the girls.
Captain Underpants actually inspired me to start writing my own comics when I was very little. They were mostly just stick figures in capes but you have to start somewhere.
Anyone remember elementary school when they had book fairs in the library and it would be total chaos. Those book fairs were the best things ever and the one thing I miss about school. I think that’s where I got most of my Capitan Underpants books. I really need to buy the last four books.
I really loved these books and then there was the six-year gap between Book 8 and Book 9. At the time I thought Dav Pilkey, the author, had dropped off the face of the earth or something. And by the time Book 9 came out I was 18 and had lost interest. But since DreamWorks decided to make the book series into a movie, I’ve gained interest yet again. 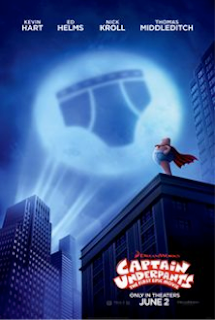 I kind of wish someone had made this movie back when I was in elementary school, when the books where more popular. But doing it now is good too because CG movies have gotten so much better since then.
Side note: I actually saw a man cosplay as Captain Underpants at Comic Con this year. I looked for 2 seconds before turning away because…let’s just say I’m glad the movie is going to be an animated film and not live-action.
1 Comment
0 Likes

My Life as a Fifth-Grade Comedian by Elizabeth Levy

Field Trip to the Moon by John Hare