The Wolf Keepers by Elise Broach

The Wolf Keepers by Elise Broach
6th Grade and Up 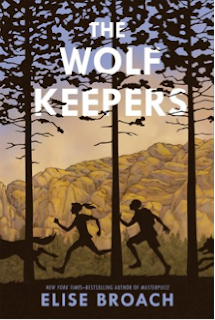 12-years-old Lizzie Durango has always had a zoo to call home. Her dad is the head zookeeper at the California wildlife park named after famous naturalist John Muir, and Lizzie had grown up bottle-feeding baby llamas and handing boa constrictors.
One afternoon while roaming the zoo grounds, she bumps into Tyler Briggs, a runaway who has secretly made the zoo his makeshift home. The two become friends and are soon drawn into an investigation involving the zoo wolves who are suddenly dying. Little do they know, this mystery will draw them into a high-stakes historical adventure involving the legend of John Muir as they try to navigate safely while love in Yosemite National Park.
This book was written by Elise Broach, the author of the ‘Superstition Mountain’ Series, and once again she’s written another brilliant historical mystery. I read the first Superstition book while lying in a hammock in Utah and it was so much more enjoyable then reading the other two at home in my room. I regret not reading this book in Utah surrounded my nature.
Has anyone noticed how many stories there are where the main character’s mother or father or both are dead? Why are there so many stories like that? It’s not like that in real life. Not every ones parents died in a car crash or a disease. It’s just sort of lazy writing at this point. I only mention it because this story has the same concept but it’s extra sad. Lizzie’s mother died right after she was born, she never got a chance to know her mother. But enough of this sadness, that’s not what this book is about.
I love animals; they are so much better than humans. Humans are just furless creatures with thumbs that can build stuff. And humans can be so stupid and mean. Animals can be mean too but look at all those unlikely animal friendships. My personal favorite friendship is Tarra the elephant and Bella the dog. If those animals can get along, what’s our excuse?
My favorite animals are tigers. Their faces are so beautiful and their paws are so big, even when their babies. One time when I was at the zoo, I saw a tiger lying in the grass all bored. I have this fantasy where I go up to the tiger and hug it around the middle. The tiger would lift it’s head and look at me like ‘What do you think you’re doing?’ It would yawn real big then lie back down and think ‘Eh I don’t care.’ I know this could never happen but I can dream.
This is probably going into too much detail about the story but I want to make a point. The John Muir Zoo homes seven wolves. The reason behind this is conservation. The wolves were injured or trapped or were caught killing cattle or sheep. If they weren’t kept in the zoo they would’ve ended up shot or poisoned. The wolves are being kept in the zoo to keep them safe but they aren’t free. The same goes for all zoo animals. This book asks the question, ‘Should animals be kept in zoos?’ There really isn’t a good answer to this. Some animals wouldn’t last in the wild, for example Winter the dolphin from Clearwater Marine Aquarium. Again, no good answer.
I learned a few cool things about animals from this story. Here are my Top 2 Facts:
1) Tiger pee has ‘a particular acrid stench that almost burns your nostrils’.
2) Giraffes can’t throw up easily (I previously knew this and it’s sort of obvious, the long neck and all. It would take forever).
Be sure to read the ‘Author’s Note’ to find out what’s fact and what’s fiction.
0 Comments
0 Likes

The Seventh Most Important Thing by Shelley Pearsall