On the Run by Tristan Bancks

On the Run by Tristan Bancks
Middle School 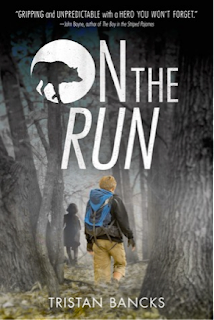 Ben has always wanted to be a cop, so he’s intrigued when police officers show up at the door, asking for his parents. Then his parents arrive after the police leave and rush him and his sister into the car, insisting they are going on a vacation. Ben’s a little skeptical – his family has never gone on vacation.
They end up hiding out in a remote cabin deep in the woods and Ben discovers that his parents have committed a crime. Ben isn’t sure what to do next? Look for someone and tell them what happened? Or keep the secret and live life on the run?
Let me tell you right now that this story takes place in Australia, somewhere around Wales. I didn’t know that there was a Wales in Australia. It took me till half way through the book to figure it out.
His sister seemed to get what was going on a lot faster than Ben did and she seemed to be able to see that their father was a monster long before Ben did.
I’ve read a lot of books about kids going up against some really bad guys but what do you do when the bad guys are your own parents? It’s hard to say what anyone would do in this situation.
There’s a psychological reason why Ben doesn’t give up his parents to the cops right away. He’s only 12 and when you’re young you learn to obey your parents. He’s more scared of his father then he is of the police. The same reason goes for the mother, she was too scared to go up against her husband.
And with that I leave you with this little story from the first page of this book:
An old man tells his grandson one evening that there is a battle raging inside him, inside all of us. A terrible battle between two wolves. One wolf is
bad – pride, envy, jealousy, greed. The other wolf is good – kindness, hope, love, truth. The child asks, “Which wolf will win?” The grandfather answers simply, “The one you feed.” – Unknown origin
I heard or read this before, I just don’t remember where. The origin of the “two wolves” parable is often attributed as an old Cherokee tale, but this is disputed.
0 Comments
0 Likes

What the Dog Said by Randi Reisfeld

How to Speak Dolphin by Ginny Rorby