One for the Murphys by Lynda Mullaly Hunt 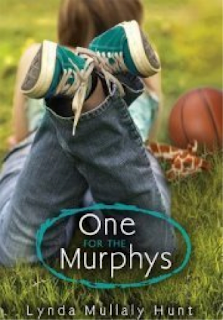 Carley Connors has learned to be tough, growing up in Las Vegas with her fun-loving mother. But after a heartbreaking betrayal, Carley finds herself in foster care. When’s she’s placed with the Murphys, a lively family with three boys, she’s blindsided. Do happy families really exist? Mrs. Murphy makes her feel heard and seen for the first time. Then, just when she’s feeling like she could truly be one of the Murphys, news from her mother shakes her world.
This is one of the most nerve-wracking, mind-bending books I’ve ever read. It will make you sad, angry, and horrified all at once. I thought ‘How to Speak Dolphin’ was an emotional rollercoaster but this book is ten times more emotional.
This poor girl is put into a nice home with a kind women and she doesn’t know how to handle it. She was so used to being around a mother who would get mad at her so often she doesn’t understand why this women is being so nice to her.
This is yet another story I think all kids should read. People need to know that a parent can love a child like they are their own even when they’re not. But they also need to know that there are some adults who should never have children. Not all parents love their children and that’s pretty much the saddest thing ever.
Carley has more people being mean to her besides her mother. The older Murphy brother and a girl at school are giving her a hard time. I can understand why the boy is giving her a hard time. He thinks she’s trying to steal his mother. But the girl has no reason to give Carley a hard time. This girl just has her own family issues and is taking them out on poor Carley. That’s something I found out in a TV show once; you apparently never strike out on the thing you’re really mad at, you just take it out on someone else. So if someone makes fun of you, it’s really their problem not yours.
I’ve never understood how a parent can’t love their child. Mostly because I’m so loved. I think a parent who would purposely hurt their child is the worst kind of person ever.
This is one of those books that elementary school teachers would have children read. I remember in school how we would read a book and then dissect it, figuring out why the character is doing a particular thing.
0 Comments
1 Likes

Imagine That! How Dr. Seuss Wrote The Cat in the Hat by Judy Sierra

The Marvels by Brian Selznick