Our story begins with Ben and his overly enthusiastic father off on a road trip to rescue a Border collie puppy. Also tagging along on this road trip is the family’s border collie, Atticus, Ben’s thuggish pal, Theo, a cranky mechanic, and a waitress who just quit her job. And when you put all these crazy characters into an old yellow school bus, you get one wacky and entertaining adventure. But also a mystery, because someone is following them…
This is an incredible book for the whole family. The trouble Ben and his dad get into will have you falling on the ground laughing. The amazing thing is that a father and son wrote it. Apparently Gary Paulsen sent his son a section of a story he was working on and his son sent him back a chapter about the characters on a bus. They went back and forth from there. Just read the Author’s Note at the beginning of the book for more details. I like to think they were trying to out-do the other, trying to come up with the funniest idea.
This book is available on book on tape and I recommend listening to it on an actual road trip. 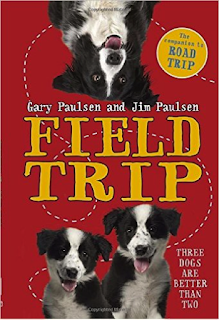 The story begins with Ben being invited to try out for a special hockey academy. But after finding out just how many days of school Ben’s missed because of hockey, his dad wants him to catch up with the school field trip instead. On their adventure, their two border collies, Atticus and Conor, Brig, a hungry house-renovating apprentice, and fellow classmates, twins Jacob and Charlotte accompany them. Ben works out a plan to make the tryout, but Atticus and Conor are on to him.
Like last time, nothing works out the way it’s supposed to. But if everything went the way it’s supposed to, that wouldn’t be fun now would it?
When I found this book at the library, I actually jumped for joy. The story is really just them driving around in an ice cream truck getting into weird situations. But that’s what made the last book so great.
2 Comments
0 Likes

Not If I See You First by Eric Lindstrom

The Lotterys Plus One by Emma Donoghue