See You in the Cosmos by Jack Cheng

See You in the Cosmos by Jack Cheng 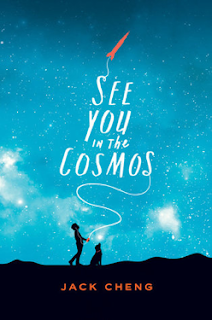 11-year-old Alex Petroski loves space and rockets, his mom, his brother, and his dog Carl Sagan – named for his hero, the real-life astronomer. All he wants is to launch his golden iPod (an iPod he spray-painted gold) into space the way Carl Sagan (the man, not the dog) launched his Golden Record on the Voyager spacecraft in 1977.
From Colorado to New Mexico, Las Vegas to L.A., Alex records a journey on his iPod to show other lifeforms what life on earth, his earth, is like. But his destination keeps changing. And the funny, lost, remarkable people he meets along the way can only partially prepare him for the secrets he’ll uncover – from the truth about his long-dead dad to the fact that, for a kid with a troubled mom and a mostly not-around brother, he has way more family than he ever knew.
This is one the most creative and heartfelt book I’ve ever read. I highly suggest listening to this book on audio because the book itself is Alex Petroski recording himself while he’s traveling to launch his rocket. The audio version features a full cast and full background noises. The audio is so great you feel like Alex is talking directly to you.
Examples of background noises:
Alex is an expert when it comes to space, rockets and Carl Sagan (the man, not the dog) but pretty clueless to most other things. He doesn’t seem to get that his mother and his brother pretty much neglect him. Whenever he talks about his mother or brother, he does it so causally and when he finally finds out the truth it broke my heart. It’s theorized that Alex has autism but it’s never said for sure. Personally, I think he does. He has all the major signs: sensitivity to people arguing, cries easily, takes everything said literally, obsessed with a single subject. And the biggest one of all: socially awkward. Every time Alex meets someone new, he tells him or her his whole story. Alex kind of reminds me of a little boy I met at Barnes and Nobles. That little boy talked so much I pretty much learned his whole life story in thirty minutes. I hope life doesn’t spoil his wonderful quirks.
The actual Voyager Golden Record (the record Alex is replicating) contains a good portion of Earth’s history intended for any intelligent extraterrestrial life form. The Golden Record includes greetings in 55 languages, music (multiple songs by multiple artists), sounds (surf, wind, and thunder and animal sounds), brainwaves, and images. The Golden record is basically Earth’s time capsule.
This is a great inner journey story that everyone should read.
0 Comments
0 Likes

24 Hours in Nowhere by Dusti Bowling