Short by Holly Goldberg Sloan
4th Grade and Up 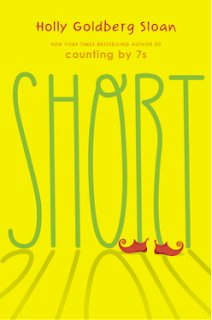 Julia is short for her age, but by the end of the summer run of The Wizard of Oz, she’ll realize how big she is inside, where it counts. She hasn’t ever thought of herself as a performer, but when the wonderful director of Oz casts her as a Munchkin, she begins to see herself in a new way.
As Julia becomes friendly with the poised wise Olive – one of the adults with dwarfism who’ve joined the production’s crew of Munchkins – and with her deeply artistic neighbor, Mrs. Chang, Julia’s own sense of self as an artist grows. Soon, she doesn’t want to fade into the background and it’s a good thing, because her director has more big plans for Julia.
It could probably get annoying being short at times. Like not being able to get something from the top shelf or being too short to ride a roller coaster or not being able to see over the dashboard but it doesn’t seem like the worse thing in the world. But this story really isn’t about being short; it’s more of a side plot. The real story is how the theatre changes Julia’s life.
If you like this book, check out the original Netflixs series Julie’s Greenroom.

Julie’s Greenroom stars Julie Andrews who is joined by her assistant Gus and “Greenies”, a cast of original puppets built by The Jim Henson Company. Each episode features different performing arts, such as improv and writing an original song. And every episode features a gust star who teaches the puppet children about a specific area of the performing arts.
This show is aimed at a preschool kids audience but I love this sweet little show. My favorite character is Hugo the Duck. I don’t know why they added a duck but I’m glad they did. This show is great for younger kids to adults so moms and dads can watch with their kids.
1 Comment
0 Likes