Texting the Underworld by Ellen Booraem

Texting the Underworld by Ellen Booraem
6th Grade and Up 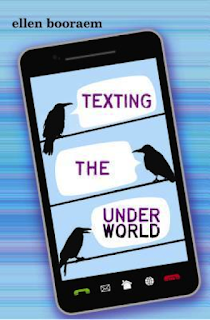 This story is about Connor O’Neill whose life gets turned upside down when an inexperienced young banshee named Ashling shows up in his bedroom. The arrival of a banshee means only one thing: Someone in his family is going to die. Not only will Ashling not tell him who it is, she’s so fascinated by the world above that she insists on going to middle school with him.
If Connor wants to keep his family safe, he must visit the underworld and bargain to prevent the death of a family member.
This book was not what I expected. There’s a lot more information about the origins of banshees than I thought and it was very interesting. I want to find more books about lesser talked about mythical creatures like banshees. Zombies, vampires and ghost are too played out these days.
This books version of the underworld is a lot different from other books I’ve read (more books about the underworld in future posts). It seems like every countries,
every religions, beliefs on death are all true in the book. There is no one thing. They’re all mushed together. Which I think is a really cool way to do it.
0 Comments
0 Likes