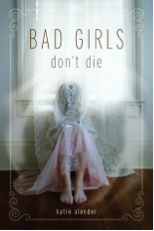 Bad Girls Don’t Die (Bad Girls Don’t Die, #1)
This story is about antisocial, anti-cheerleader Alexis, whose doll-crazy 13-year-old sister, Kasey, is acting stranger than usual: her blue eyes so green; she uses odd, old-fashion language – and she’s losing track of chunks of time, claiming to know nothing about her weird behavior.
Their old house is changing too. Doors open and close by themselves, water boils on the unlit stove, and an unplugged air conditioner turns the house cold enough for the girls to see their breath.
Alexis wants to believe it’s all in her head, until these harmless occurrences turn life threatening – to her, to her family, and to her budding relationship with the student council vice president. Alexis knows she’s the only person who can stop Kasey, but what if that green-eyed girl isn’t even Kasey anymore?
These books are the perfect horror story. It’s perfect for me personally because I’ve always been interested in horror films but I’m too scared to watch them. The things jumping out at you on the screen really freaks me out. That’s why I read horror books. The words aren’t going to jump out at you.

From Bad to Cursed (Bad Girls Don’t Die, #2)
Alexis’s has everything she needs – an adorable boyfriend, a perfect best friend, and a little sister who’s finally recovered after being possessed by an evil spirit.
When her sister joins the Sunshine Club, Alexis finds it strange how fast the girls go from dorky and antisocial to gorgeous and popular. Then she discovers that the girls have pledged an oath to a seemingly benevolent spirit named Aralt. Worried that Kasey’s in over her head again, Alexis and her best friend, Megan, decide to investigate by joining the club themselves. Soon, Alexis trades in her pink hair and punky clothes for a mainstream look, and finds herself liking her newfound elegance and success.
The club’s connection with Aralt seems harmless and Alexis can hardly remember why she joined in the first place. Surely it wasn’t to destroy Aralt…why would she hurt someone who has given her so much, and asked for so little in return.
I can sum up the plot of ‘From Bad to Cursed’ in one word: Cult.
This time, Alexis is the one being controlled and it is terrifying. It starts off little by little and then she’s acting like a totally different person. I want to yell at her to snap out of it. Throughout the entire book I’m thinking ‘How is she gonna get out of this?’ You know it’s a great book when you’re yelling at the pages.

As Dead As It Gets (Bad Girls Don’t Die, #3)
It’s been 3 months since Alexis helplessly witnessed Lydia Small’s violent death, and all she wants is for her life to go back to normal. But now she sees ghosts in every photograph and has to deal with Lydia’s angry ghost.
At first it seems that Lydia wants revenge on Alexis alone. But a girl from school disappears one night, and Alexis spots one of Lydia’s signature yellow roses lying on the girl’s dresser the next day. It becomes clear that several of her friends are in danger, and she’s the only one who can save them. But she soon realizes that her enemy is a much more powerful ghost then she’s ever faced before.
This one just bummed me out. The story is fine but Alexis’s situation with her ex-boyfriend and her current boyfriend made me sad and angry. She has a really nice boyfriend who really likes her, and I have a boyfriend who I hardly see. She has a boyfriend who drove miles to help her with her car; my boyfriend won’t drive 2 miles to come to my house. She has a boyfriend whose eyes would trace her movements through a crowd; I have a boyfriend who won’t take his eyes off his phone to look at me. Can you see why I’m bitter? I would’ve liked this book a whole lot more if they didn’t keep switching from the ghost investigation to her love life.
After I finished the series, I found book trailers for all three books on YouTube. They’re well-made and very creepy. Although, I found it a bit odd that Zendaya and Bella Thorne (both stars of Disney Channel’s Shake It Up) appear in the trailers. See book trailers below:
Bad Girls Don’t Die
https://www.youtube.com/watch?v=36lBeqV7V00
From Bad to Cursed
https://www.youtube.com/watch?v=6ID1jz0A8LU
As Dead As It Gets
https://www.youtube.com/watch?v=TBNCkwSl-fo
2 Comments
0 Likes