The Ghost’s Grave by Peg Kehret

The Ghost’s Grave by Peg Kehret
4th Grade and Up 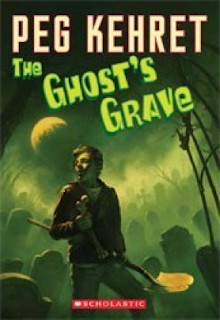 What Josh thought would be the dullest summer of his life, spent with his eccentric great-aunt, turns chilling when he meets the ghost of a coal miner killed in a mine explosion. Willie has been waiting years for some kind soul to dig up his leg and rebury it with the rest of him only then will he be at peace. Josh agrees to do the grisly deed, but when he digs in the old cemetery, he finds more than Willie’s leg bones. Who buried the box of cash in the grave and why? How far will that person go to get the money back?
I can’t remember if I read this book back when I was in elementary school or middle school. Either way it was a good book. This book is pretty tame compared to other books I’ve read but it was one of my first steps towards scarier books.
I think I read this book back when I was going through a ghost phase. I was obsessed with ghosts. I have an instamatic camera that would spit out the
picture after you took it and I would go to places that were rumored to be haunted. I took a lot of pictures and you actually could see ghost orbs in the pictures. It goes without mentioning but I was a weird kid. I also went through a mermaid phase but that’s another story.
One thing I found interesting were the meals Josh’s great-aunt made for them. She made spaghetti for breakfast and pancakes for dinner.  I couldn’t do this. I have some weird eating habits and when I go off them it’s like my stomach is yelling, “What did you put into me?!” Although I would put up with ‘pancakes for dinner’ stomachache.
There is one line in this book that no kid born after 2000 is going to get so I’m going to explain it. In the story, Josh complains that he can’t rent a video
because the town he’s in doesn’t have a video store. You see kids, back in the day there was a magical place called ‘Blockbusters’ and ‘Hollywood Videos’
where you could go and rent VHR tapes and later on DVDs to bring home and watch and you had to rewind the tapes back to the beginning before you returned them. ‘Blockbusters’ and ‘Hollywood Videos’ were my favorite places as a kid. Half the movies I found there you can’t find on DVD or Hulu or Amazon Prime or Netflixs or the RedBox.  Now a day, all the video stores are gone and that makes me sad. And now books are being turned in eBooks and that make me sad too. I’m one of those people who likes to have the physical book in my hand and the physical DVD to put into the DVD player, I’m weird that way.
0 Comments
0 Likes