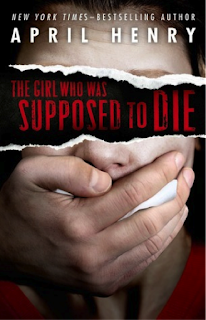 “Take her out back and finish her off.”
She doesn’t know who she is. She doesn’t know where she is, or why. All she knows when she wakes up in a ransacked cabin is that there are two men arguing over whether or not to kill her. And that she must run.
Just like the main character you pretty much have no idea what exactly is going on in the first couple of chapters. But, for me, that’s what makes the book so suspenseful.
I think April Henry has written the most terrifying scenario ever; Waking up with your mind blank, remembering nothing about yourself and hearing two men arguing about whether or not to kill you. That just chills me to the bone.
This story combines two thing that make this story even more interesting; dissociative amnesia and biological warfare.
Dissociative amnesia occurs when a person blocks out certain information, usually associated with a stressful or traumatic event, leaving him or her unable to remember important personal information. The way I see it, it’s kind of like the brain in protecting itself by blocking the memory.
Biological warfare is the deliberate spreading of disease amongst humans, animals, and plants, meaning making people sick and/or die on purpose. I can’t say too much without giving away the good parts of the story. All I can say is that biological warfare is one of the sickest thing anyone could every do.
0 Comments
0 Likes

The Matchstick Castle by Keir Graff

I Survived: True Stories & I Survived the American Revolution, 1776 by Lauren Tarshis