The Last Book in the Universe by Rodman Philbrick

The Last Book in the Universe by Rodman Philbrick
Middle School 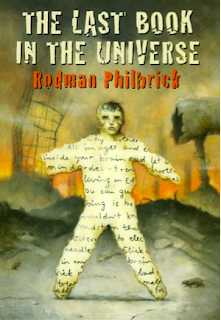 They call him Spaz, because his epilepsy prevents him from using mind probes that are rotting everyone else’s minds. Which is why he still has a memory, something rare in the frightening world he lives in. Civilization has been destroyed, except for the forbidden place called Eden, where a small group of people have discovered genetic improvement. Yet one old man, the one they call Ryter, has a lot of crazy and wonderful ideas. Nobody remembers books, but Ryter is writing one, even though he knows he may be punished by death.
I first found this book in my middle school library. I don’t know why I didn’t read it then but I’m reading it now so anyway…
This is the only book I’ve found about someone with epilepsy and it’s not really the main plot of the story. It’s just the reason why Spaz can’t use the mind probes. I did some research on epilepsy and it’s interesting. Epilepsy occurs as a result of abnormal electrical activity originating in the brain. Brain cells communicate by sending electrical signals in an orderly pattern. In epilepsy, these electrical signals become abnormal, giving rise to an ‘electrical storm’ that produces seizures.
In the story, Ryter lists famous people who had epilepsy. Most of them I’m not so sure about, but here are a few I looked up; Vincent van Gogh (makes sense), Napoleon Bonaparte (might have), Charles Dickens (who wrote about a character with epilepsy), Alexandra the Great (back then it was called ‘the sacred disease’), and Edgar Allen Poe (would explain how he died). I’m hoping to find more books about characters with epilepsy.
Is it just me or is every other book out there about the future gone wrong? I try to stay away from the bad ones like ‘The Hunger Games’ but I’ve found some pretty good ones with realistic futures. What scares me the most about this books’ future is that it could happen. Well parts of it anyway. For example, people have already figured out how to build virtual reality goggles and technology becomes more advanced each day. It’s just a matter of time before we’re sticking probes in our brains for the next big thing. And bookstores are just a couple years away from becoming obsolete and now people are reading eBooks on electronic tablets. I DON’T WANT TO LIVE IN A WORLD WITHOUT PHYSICAL BOOKS!
1 Comment
0 Likes

The Fudge Series by Judy Blume