The ‘Last Kids on Earth’ Series, Books 1 – 5 by Max Brallier

It’s been 42 days since the monster apocalypse hit town and pretty much everyone ran away or got zombified. Average 13-year-old Jack Sullivan is holed up in his tree house, which he’s armed to the teeth with catapults and a moat, not to mention video games and an endless supply of Oreos and Mountain Dew scavenged from abandoned stores.

But Jack alone is no match for the hordes of Dozers and Winged Wretches and Zombies, and especiallynot for the eerily intelligent gargantuan menace known only as Blarg. So, Jack builds a team: his dorky best friend, Quint; the reformed middle school bully, Dirk; Jack’s loyal pet monster, Rover; and Jack’s crush, June. With their help, Jack is going to slay Blarg, achieve the ultimate Feat of Apocalyptic Success, and be average no longer!

I had no idea a monster/zombie apocalypse comedy chapter book/graphic novel series for kids would be so much fun to read. With plenty of action and cool illustrations on every other page, this book is perfect for reluctant readers. The thing I liked the most was the growing friendship between the four main characters, especially Dirk and Quint’s odd friendship. Older readers might think that Jack is being immature and not taking anything seriously, but you have to keep in mind that he’s just a kid trying to survive the apocalypse. If treating the end of the world like it’s a video game keeps his mind from snapping like a twig, then good for him.

The only problem I had with this book is Jack’s views on girls. Throughout most of the story, Jack is obsessed with ‘rescuing’ his crush, June, convinced that when he does she’ll fall for him and he even called dibs on her. You could probably just say Jack is being a dumb 13-year-old boy but if we want males to stop seeing females as objects, we should stop saying things like this in children’s literature.Luckily, June is no damsel in distress and has the brains and brawn to take care of herself.

The zombies are disappearing. This might seem like a good thing, but Jack Sullivan is suspicious. He keeps hearing an eerie shrieking noise that seems to be almost summoning the zombies—but to where, and for what (probably) foul purpose?

Jack, his three best friends, and their pet monster Rover need to get to the bottom of this. Along the way they encounter a lot more than they bargained for, including a giant Wormungulous, a pizza parlor monster hangout, an ancient evil who destroys worlds, and a stereo system that is totally the bomb. Can Jack figure out why the zombies are vanishing . . . before he and his friends are next?

The story could never just be the kids goofing off and defeating monsters, there has to be an ongoing plot. Luckily, the author manages to expand the story without making it too complicated. We finally find out how the monster/zombie apocalypse started (turns out it wasn’t some secret government project gone wrong like I originally thought). The kids gain new monster allies and learn about new terrifying enemies who will undoubtedly show up again.

Jack’s friends have made a startling discovery: they may not be the last kids on earth, after all. This is great news for everyone… except Jack. Once they’ve found other humans, his friends won’t stick around for long! Jack’s only hope for keeping things the way they are is to prove that everything here is perfect, life is crazy fun, and nothing else could be any better.

But it’s hard convincing his friends that everything is great when they’re being hunted by a monstrous Nightmare King and an ancient evil who won’t rest until Earth has been devoured. Maybe life after the monster apocalypse is more complicated than Jack thought.

I love the interspecies city the kids and the monsters have now established. They even have restaurants and the occasional movie night.

Jack’s actions in this story are a bit selfish but you have to understand that he’s a foster kid whose been moved from place to place, with no parents or anyone looking for him. It’s understandable that he doesn’t want to lose the friends and close community he now has. And he does come up with some pretty fun things to do. My personal favorite game was The Streets Are Lava, where they had to get as far across town, jumping from rooftop to rooftop, without touching the street.

It’s the first winter after the Monster Apocalypse. For Jack and his buddies, that means sled catapults, epic snowball battles, and one monstrous Christmas celebration. But their winter wonderland turns dark when a villainess begins hunting them. And this villainess is different — she’s a human.

One of my many favorite parts was when the kids introduced Christmas to the monsters. They’re confused Christmas trees and fascinated by the concepted of giving and receiving gifts.

After the second book, I had my doubts on the new direction this story was going, but now I’m hooked. There’s so much going on in this story that I can’t even put it into words. One thing I can say is that this new human villain wants to bring this evil cosmic demon thing to Earth for some crazy reason. I also have no idea if this girl is a kid or an adult.

When Jack discovers his Louisville Slicer has new, otherworldly powers, he’s thrown into epic training to find out what kind of destruction the blade can wield. But between fighting off zombies, fleeing from strange, glowy Vine-Thingies erupting from the ground, and squeezing in a video game session or two, there’s barely time left to figure out what’s wrong with their buddy, Dirk, who’s been acting weird any time he’s around the undead. When an unexpected villain appears, can Jack and his friends save themselves – and the rest of the world – from cosmic domination?

The story has come a long way since the first book. The main four are no longer dumb kids running around having fun while trying to survive. Everyone has gone through some character development, especially Jack. He’s matured a bit, not by much, but a little. He still manages to goof off and have fun while training with his new and improved Louisville Slicer. Jack is hoping to go through an epic training montage like from every action movie but since this is Jack it goes as well as you’d expect. 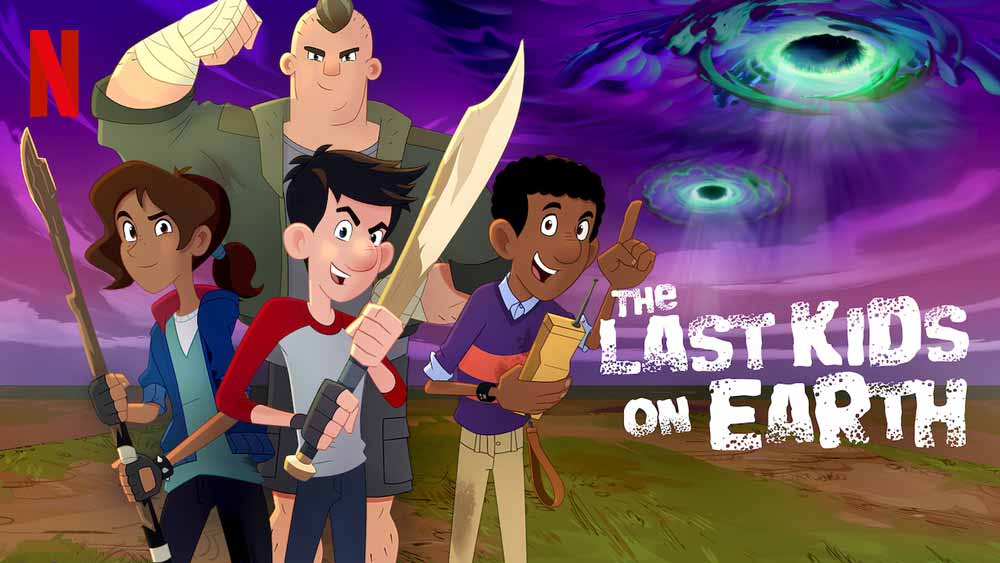 The main reason I got into this series is because, on the same today the fifth book came out, Netflix released an animated show based on the books. I had no idea how this show was going to work. Turns out each book will be made into its own movie and, thankfully, will be sticking to the original story line. It was nice to see everything in color after all the black and white illustrations from the books.

This story is far from over. Book 6 is expected to come out Fall of 2020 and June is getting her own adventure story in Summer of 2020. It has also been confirmed that Netflix will be having not just a second season, but a third season is in the making as well.

This weeks’ Weird but True Fact about Zombies

As a training tool, the U.S. military created a plan to combat zombies.