The Lotterys Plus One by Emma Donoghue

The Lotterys Plus One by Emma Donoghue
Middle School 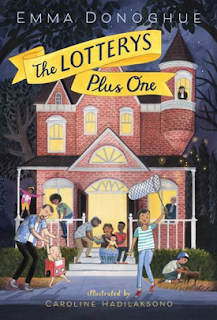 Sumac Lottery is nine years old and the self-proclaimed “good girl” of her (VERY) large, (EXTREMELY) unruly family. And what a family the Lotterys are: four parents, children both adopted and biological, and a menagerie of pets, all living and learning together in a sprawling house called Camelottery. Then one day, the news breaks that one of their grandfathers is suffering from dementia and will be coming to live with them.
And not just any grandfather; the long dormant “Grumps,” who fell out with his son so long ago that he hasn’t been part of any of their lives.
Suddenly, everything changes. Sumac has to give up her room to make the newcomer feel at home. She tries to be nice, but prickly Grumps’s clearly disapproves of how the Lotterys live: whole grains, strange vegetables, rescue pets, a multicultural household… He’s worse than just tough to get along with — Grumps has got to go! But can Sumac help him find a home where he belongs?
This family is nothing like you have ever seen before but that’s what makes it interesting. And man is this family extraordinary! There are seven kids (all of them are named after trees) that it’s hard to remember who’s who. There’s Sic (16), Catalpa (?), Wood (12), Aspen (?), Sumac (9), Briar/Brian (4), and Oak (baby).
And don’t get me started with the parents, they are the most confusing. First off, there are four parents. When I first read that I got really confused. Then it was explained there are two dads (married to each other) and two moms (married to each other). It made more sense after that was explained. What confused me were the names the children used for the parents: Popcorn, PapaDum, Jamaican MaxiMum and CardaMom. I really had a hard time keeping these names straight.
If you like stories about big families, check out The Loud House on Nickelodeon. 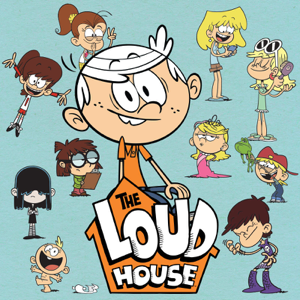 The Loud House is about Lincoln Loud, the middle child of 10 sisters. Each sister has her own different personality so there’s a girl for everyone to relate to.
0 Comments
0 Likes

The Lovely and the Lost by Jennifer Lynn Barnes