The Night She Disappeared by April Henry

The Night She Disappeared by April Henry
High school 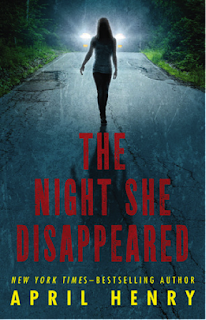 What if you were targeted to be kidnapped but the kidnapper got the wrong girl?
Gabie drives a Mini Cooper. She also works part time as a delivery girl at Pete’s Pizza. One night, Kayla – another delivery girl – goes missing. To her horror, Gabie learns that the supposed kidnapper had asked if the girl in the Mini Cooper was working that night. Gabie can’t move beyond the fact that Kayla’s fate was really meant for her and becomes obsessed with finding Kayla. Teaming up with her co-worker Drew, they set out to prove that Kayla isn’t dead and to find her before she is.
“The Night I Disappeared” was the first April Henry book I read and she had me hooked on the first chapter. Imagine the fear you would have being kidnapped and imagine the guilt you would have if the person kidnapped was suppose to be you. April Henry brings that fear to life.
The narration switches between Kayla, the girl who was kidnapped and Gabie, the girl who was supposed to be kidnapped, and the kidnapper himself. I like Kayla’s parts the best, how she was terrified to begin with (and who wouldn’t be) to trying to figure out how to escape. This book doesn’t have just one strong female character, it has two.
0 Comments
0 Likes

It Ain’t So Awful, Falafel by Firoozeh Dumas