‘The Worst’ Series by Dave Barry

‘The Worst’ Series by Dave Barry
11 and Up 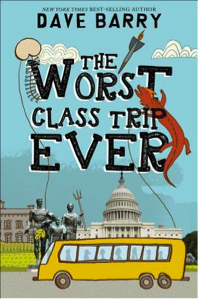 The Worst Class Trip Ever (The Worst, #1)
Eight-grader Wyatt Palmer is on his way north from Miami, Florida, to Washington, D.C. along with his classmates. Wyatt, his best friend, Matt, and a few other friends fine themselves in a heap of trouble – not just with their teachers – but from two mysterious men they first meet on their flight to the nation’s capital. Throughout their trip, the kids try to stay out of danger while trying to save the president from an attack.
This is a great book full of adventure and laughs that any kid would love. Adults too. I read the ending to my mom and she couldn’t stop laughing, I think she liked it more than I did.
The oddest thing about the book is that in the first chapter, Wyatt takes us off topic by telling us a story about his Dad and his underwear. It’s kind of like the author was getting us ready for the main story by telling us this hilarious mini story.
This book reminds me of the movies I watched the most as a child, where the kids solved the mystery and saved the day. My favorites were ‘Clubhouse Detectives’ and ‘Message in a Cellphone’. But those kids didn’t have iPhones to look stuff up like the kids in the book, which is an unfair advantage if you ask me.
The Worst Night Ever (The Worst, #2) 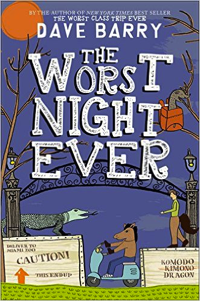 We join Wyatt Palmer once again but he is no longer seen as a hero: He is now just another undersized freshman at Coral Cove High School. Things go wrong for Wyatt when his friend Matt Diaz, who unfortunately is an idiot, decides to bring his pet ferret, Frank, to school. Through an unfortunate turn of events Frank ends up in the hands of the Bevin brothers, who are the most popular boys at Coral Cove High but also the nastiest. When Wyatt and Matt sneak into the Bevin’s water front mansion to rescue Frank, they stumble onto the Bevin family’s dark and deadly secret.
It’s hard to believe but this book was even more exciting than the first one and that’s saying a lot because the first one was pretty nail biting at the end. But this one kept me nervous the entire time.
This book starts off with another pointless but entertaining mini story. I’m not saying it wasn’t good but the mini story in the first book was funnier.
The one thing that made me so angry reading this story was that it had a type of villain that I despise. Worst of all, there were three of them. The type of villain I’m talking about is one that exists in real life, the type that gets away with anything, including murder, just because they have a lot of money and know the right people. And the main villain planned to do something so idiotic, so inhuman, that I was hoping the worst would happen to him.
I don’t know if Dave Barry will be writing another book for this series but if he does you can expect an opinion on it.
0 Comments
0 Likes

I Am Walt Disney & I Am Marie Curie by Brad Meltzer