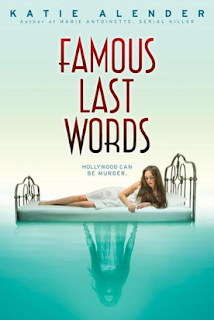 After moving from suburban Connecticut to Hollywood when her mom married Jonathan, a movie director, it seems like she’s seeing things in her new house. Like a dead body in her swimming pool, frantic messages on her walls, a reflection that is not her own. It’s almost as if someone – or something – is trying to send her a message.
Meanwhile, a killer is stalking Los Angeles – a killer who reenacts famous movie murder scenes. Could Willia’s strange visions have to do with these unsolved murders? Or is she going crazy? And who can she confide in? There’s Marnie, her new friend who may not be totally trustworthy. And there’s Reed, who’s ridiculously handsome and seems to get Willia. There’s also Wyatt, who’s super smart and unhealthily obsessed with the Hollywood Killer.
All Willia knows is, she has to confront the possible ghost in her house, or she just might lose her mind…or her life.
This book was written by Katie Alender, the same women who wrote the ‘Bad Girls Don’t’ Die’ Series. I honestly liked this story better than the ‘Bad Girls
Don’t Die’ books. I’m not saying those books were bad, I just like single books better than series books.
Willia’s character was refreshingly real. Some female characters are too ‘poor little me’ about everything that’s happening to them. Some characters have good reasons to be like that but they spend more than half the book complaining and it’s so annoying. Willia spends most of the book thinking she’s nuts but she doesn’t spend the whole book whining about it. She goes out and does something about it. She is the type of female character I want to see more of.
I like how Katie Alender doesn’t try to make Hollywood sound all ‘glamorous’. I’ve been to Hollywood Boulevard many times and I can honestly say it’s not glamorous. The whole place is really gross with too many people, filthy sidewalks and people selling drugs.
You’re questioning throughout the story whether the visions she is having are all in her head or something more supernatural is going on. I’ve read books and watched a lot of TV shows about people who can see something others can’t and I’ve always been fascinated with that concept.
I don’t want to say too much about this book out of fear of giving too much away. I will say that if you want to read a book about movies, Hollywood history, a serial killer, and a little romance thrown in for good measure, this is the book for you.
0 Comments
0 Likes