Monstrous by MarcyKate Connolly
Hey Everyone!
I’ve got something special planned for my blog for the month of October.
But before that, let’s get started with a monstrous story to get everyone ready for October and Halloween.
Please enjoy!
5th Grade and Up 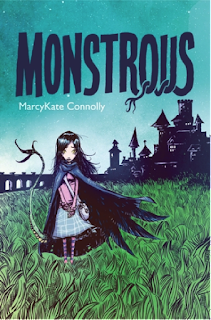 The city of Bryre suffers under the magic of an evil wizard, whose curse has girls sicken and disappear without a trace. Bryre’s inhabitants live in fear and no one is allowed outside after dark.
But night is the only time that Kymera can enter this dangerous city, for she must not be seen by humans. Her father says they would not understand her wings, the bolts in her neck, or her spiky tail – they would kill her. They wouldn’t understand that she was created for a purpose: to rescue the girls of Bryre.
Despite her caution, a boy named Ren sees Kym and begins to leave a rose for her every evening. As they become friends, Kym learns that Ren knows about the missing girls, the wizard, and the evil magic that haunts Bryre. And what he knows will change Kym’s life.
I know that was a very long summary but I couldn’t figure out how to make it any shorter.
It’s obvious that something more sinister is going on in this story but what exactly is a mystery. So I don’t ruin the story I won’t go into detail about it.
The Brothers Grimm fairy tales meet Frankenstein’s monster with a much cooler creature in my opinion. Eyes and claws of a cat, wings of a bird, tail of a snake and bolts of Frankenstein’s monster, Kymera is the perfect hybrid creature. Despite Kymera’s monstrous appearance, inside she is an innocent soul with a heart of gold and wants to do the right thing. Her picture on the cover of this book is what drew me to this story in the first place. Just look at her, she’s just so cute.
1 Comment
0 Likes

I Need a New Butt! by Dawn McMillan