Clay Jensen returns home from school to find a mysterious box with his name on it lying on his porch. Inside he discovers thirteen cassette tapes recorded by Hannah Baker, his classmate and crush who committed suicide two weeks earlier.
On tape, Hannah explains that there are thirteen reasons why she decided to end her life. Clay is one of them. If he listens, he’ll find out how he made the list.
Clay spends the night crisscrossing his town with Hannah as his guide. He becomes a firsthand witness to Hannah’s pain, and as he follows Hannah’s recorded words throughout this town, what he discovers will change his life forever.
I read this book back in 9th grade and it’s one of the best books I’ve ever read. I even did a report on it for English class. I still have the collage I made for the report in my closet. I wish I had the report to help me with this but I do not. Oh well.
I don’t want to give too much of Hannah’s story away. But I will say that her death could have been prevented if someone had taken the time to hear her side of the story. Instead they decided to believe the rumors. She just wanted it to stop and she couldn’t find any other way out. You might think what she did was cowardly but everyone has a breaking point and she had reached hers.
The thing is Clay never did anything to hurt Hannah but he never did anything to help her either. He just stood on the sidelines and watched it happen. A lot of people could have help her but no one knew what she was really going through until it was too late.
The tapes, by the way, are genius. Some might say it’s cowardly to say what happened to you after you’re dead but I think it was cool in a way. Getting a tape recording from a dead person is creepy enough but being called out for being the reason why they’re dead is mind blowing. I see it as Hannah’s way of sticking it to the people that took advantage of her. You might think the tapes were a sick joke but some of those people should know what they did to her, to scare them into never doing it again. I can honestly say that at least of five of those people deserved to suffer.
Even though actually reading the book is awesome I recommend listening to this book on audio. Being able to hear how eerily calm her voice is while she tells her story makes it so much better.
I don’t think I really absorbed what was going on the first time I read this book. Then again, I haven’t read this book in a while, plus it’s kind of depressing and I’d rather read more uplifting books. I used to read a lot of disturbing books in high school but then I got over that. I don’t really want to write posts about those books because I want to keep this blog on the positive side. The reason why I’m writing about this book at all is that Netflix has made a TV series based on the book. There’s even a soundtrack available on iTunes, 13 songs of course. 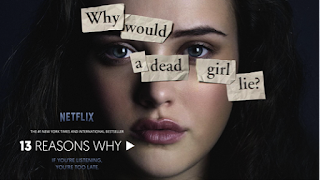 The Netflix series goes into more depth about what happened after Hannah’s death and how it affected everyone, not just Clay. The most heart-breaking part was how Hannah’s mother tries to find out what drove her daughter to suicide. Each episode is almost an hour long and features a different side of a cassette tape. I thought I would only be able to watch one episode at a time but as depressing as this story is, it’s also addicting.
As depressing as this story is, I think young adults should read this book because they need to know that something like this could be happening around you and you might not even know it. Or you do know and you acted too late.
0 Comments
0 Likes