The Astrotwins Series by Mark Kelly 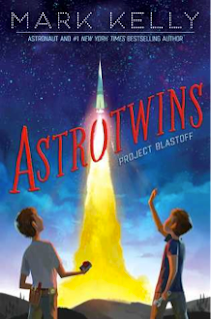 Astrotwins: Project Blastoff (Astrotwins #1)
In the summer of 1975, twins Mark and Scott Kelly are in big trouble when they take apart (a.k.a. destroy) their dad’s calculator. As punishment, they are sent to their grandpa’s house, where there’s no TV. Grandpa suggests they channel their energy into something constructive.
With the help of Jenny, nicknamed Egg, and a crew of can-do kids, they set out to build a real-live rocket that will blast off and orbit the Earth.
Unlike the ‘Moon Base Alpha’ series, an actual astronaut wrote these books. Mark Kelly was a captain in the United States Navy when he commanded the final mission of Space Shuttle Endeavour in May 2011 and is a veteran of four space flights to the International Space Station.
When I first found these books I thought it would be like ‘Phineas and Ferb’, two brothers and their friends building the impossible. But these books are nothing like ‘Phineas and Ferb’. For one, these kids didn’t build the spaceship in one day. The first book shows just how much hard work, cooperation and brainpower go into making space travel possible.
These books are for kids a lot smarter than me; the science, mathematics and physics in this story kind of went over my head. Don’t feel bad if you don’t understand everything said in this book. I didn’t really understand it and I’m 23 years old, even the simplified terms I didn’t really get.
Astrotwins: Project Rescue (Astrotwins #2) 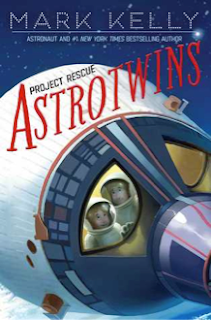 Last summer, with the help of their friends, Mark and Scott Kelly turn some spare parts into a real rocket ship and sent Scott into orbit. This summer is looking dull in comparison. Until they hear on the news that a Russian cosmonaut is trapped inside the Salyut space station orbiting 220 miles above earth.
Complete with spacesuits and snacks, the twins take off to rescue the Russian spacecraft.
This story is almost like reading a history/science textbook, so many facts it made my head spin.
A big part of this story is about Russia and how it’s different from the United States and how Russians ‘couldn’t be trusted’. I actually read another book on this subject and might review it someday. Anyway, I really don’t understand why some countries fight. I’d probably understand more if I watched the news but that’s not going to happen. For half the book I didn’t understand why the Russians would want to hurt the world then I read the word ‘Stalin’ and it started to make sense. I had to keep reminding myself that this story takes place in 1976. Then again, when it comes to how humans treat each other, it’s the same story but a different year.
Be sure to check out the Glossary at the end of each book in an attempt to understand the science and history in the stories.
1 Comment
0 Likes

Field Trip to the Moon by John Hare