PrevPrevious Book ReviewChasing Secrets by Gennifer Choldenko
Next Book ReviewI Am George Washington, I Am Jane Goodall, & I Am Jim Henson by Brad MeltzerNext 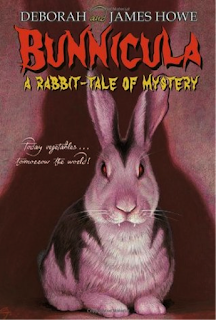 Before it’s too late, Harold the dog and Chester the cat must find out the truth about the newest pet in the Monroe house, a suspicious-looking bunny with unusual habits . . . and fangs!

I first found these books at the library years ago, and I’ve been meaning to read them but never got around to it. Now I have, and I’m glad I did. These aren’t the best books I’ve ever read, but they’re definitely not the worse. Trust me, I’ve read worst. 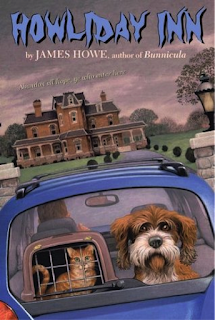 The Monroes have gone on vacation, leaving Harold and Chester at Chateau Bow-Wow, not exactly a 4-star hotel. On the first night, the silence is pierced by an unearthly howl, and that’s just the beginning.

This one was a bit weird. Bunnicula was only mentioned once and never featured. 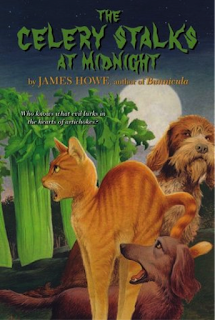 Bunnicula is missing! Chester is convinced all the world’s vegetables are in danger of being drained of their life juices and turned into zombies. Soon he has Harold and Howie running around sticking toothpaste on lettuce and any other veggie in sight. Of course, Chester has been known to be wrong before . . . but you can never be too careful when there’s a vampire bunny at large!

In this book, we get back on the subject of Bunnicula, and a new character is added. Howie is a carefree Dachshund puppy who was adopted by the Monroes from Chateau Bow-Wow in the last book. 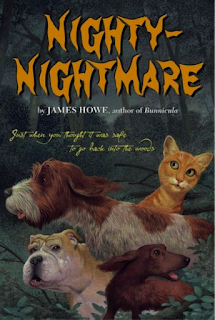 Harold, Chester, and Howie join the Monroes on an overnight camping trip. Only Chester thought the idea was completely insane. The woods were not only full of mosquitoes and ticks but of evil spirits who prey on the innocent. And on this, St. George’s Eve, when all spirits are set loose. This begins a long night, full of terrors and alarms, full of Chester’s horrifying tale of how Bunnicula was born and came to America, full of storms and a total sense of danger.

I probably would have gotten scared by this book as a kid. This one had more of a supernatural element than the other books.

The Monroes have gone on vacation, once again leaving Harold, Chester, and Howie at Chateau Bow-Wow. The motley crew of boarders may have changed, but the creepy goings-on has not.

This story was a lot more interesting than ‘Howliday Inn.’ It was more like a pet soap opera. It had strange but entertaining characters, including a weasel and a parrot. 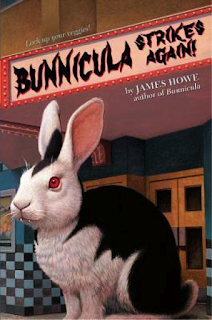 It’s happening again. The Monroes’s kitchen is littered with the remains of vegetables, drained of all color. To Chester, it’s obvious: Bunnicula, the vampire, the vampire rabbit, is up to his old tricks. But Harold is more frightened for Bunnicula than of him. The poor bunny doesn’t look too good. Is he sick? Or just unhappy? Or has Chester finally gone too far in his attempt to make the world safe for veggies?

I really should have read these books as a kid. They probably would’ve inspired me to read scarier books at a younger age. 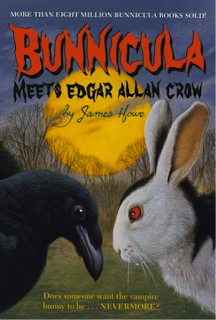 The Monroe house is going mad with excitement. Pete has just won a contest, and the prize is a school visit from M.T. Graves, Pete’s idol and the bestselling author of the FleshCrawlers series. Harold and Howie are thrilled, but Chester’s suspicious. He’s noticed something strange: In each of the FleshCrawlers books, why does something bad always happen to the pets?Suddenly, Graves’s interest in all of the animals, especially Bunnicula, looks far from innocent. It’s up to Chester, Harold, and Howie to find out if M.T. Graves and his pet, Edgar Allan Crow, are really devising a plot to make this beloved bunny . . . NEVERMORE.

I’m ashamed to say that it took me longer than it should have to figure out that ‘M.T. Graves’ was a play on ‘Empty Graves.’ This book also proves that you should never meet your heroes. 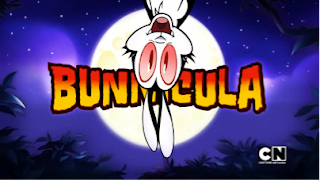 After all these years, I’m just now reading these books because someone decided to create an animated TV show loosely based on the book series. And by ‘loosely,’ I mean the creators just took the names Harold, Chester, and Bunnicula and changed everything else. It’s still a good show. I love the animation and the art style.

I actually like the show better than the books because the show takes the story into more depth than the books did. A story about a vampire rabbit has a lot of potential, but the author never dove more into the supernatural and kept the story pretty bland. Still, this is a pretty cool series for young children who want to read something spooky.

PrevPrevious Book ReviewChasing Secrets by Gennifer Choldenko
Next Book ReviewI Am George Washington, I Am Jane Goodall, & I Am Jim Henson by Brad MeltzerNext