The Fudge Series by Judy Blume

For the record, I did not plan to make it all the way to 100 posts when I first started this blog. I didn’t plan to get so into it. But I did, so here we are.

These are the best books I have ever read, so I had to have them as my 100th post. I have read them so many times that I have them memorized. I love them so much that I named my dog after Fudge. I didn’t realize when I was a kid that these books were a series and only knew about the third one (Fudge-a-Mania), which is my favorite one. It wasn’t until later that I learned that ‘Tales of a Fourth Grade Nothing’ was the first book in the series.

These books still make me laugh to this day, and I’m 23. It doesn’t matter your age. These books are just plain funny. My mom and I have listened to them over a hundred times, and my mom still laughs like she’s listening to them for the first time.

2nd Grade and Up, Fun for the Whole Family 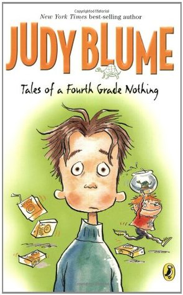 Tales of a Fourth Grade Nothing (First Published 1972)

Life with his little brother, Fudge, makes Peter Hatcher feel like a fourth-grade nothing. Whether Fudge is throwing a temper tantrum in a shoe store, smearing mashed potatoes on the walls at Hamburger Heaven, or trying to fly, he’s never far from trouble. Fudge is an almost three-year-old terror that gets away with everything, and Peter’s had it up to here!

Ironically, I didn’t read this book until 4th grade. It was a class reading book meaning the teacher would read it to us, and sometimes the students would have to read aloud. This was difficult for me because I don’t like the sound of my own voice. After reading this book, all my questions about ‘Fudge-a mania’ were answered. 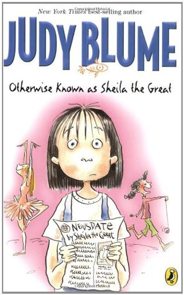 When Sheila’s family spends the summer in Tarrytown, Sheila has to face some of her worst fears. Not only does a dog come with the rented house, but her parents expect Shelia to take swimming lessons. Sheila does her best to pretend she’s an expert at everything, but she knows she isn’t fooling her new friend, Mouse Ellis, who happens to be a crackerjack swimmer and a dog lover.

In this book, we see the world through Shelia Tubman’s eyes. I’m going to be honest with you all, I really don’t like Shelia’s character. I think it’s because she doesn’t like dogs. I don’t understand why Shelia is so scared of dogs. I love dogs. When I was three, a border collie bit me, and I still love dogs. But just because I don’t like this story doesn’t mean you won’t. You are welcome to give this story a try if you want to. 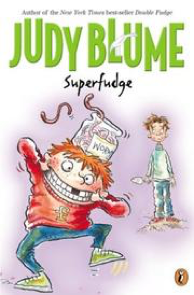 Twelve-year-old Peter Hatcher learns that his mother is going to have a baby and that the whole family will be moving to Princeton for a year. He’s worried about starting 6th grade in a strange place and going to the same school as his younger brother, Fudge. But Peter is much more concerned about this new baby turning out to be just as big a nuisance as Fudge.

This book introduces a new member of the Hatcher family, Tamara Roxanne Hatcher. Or, as they call her, Tootsie. We are also introduced to a new pet, Uncle Feather, the myna bird, my second favorite character, next to Fudge. When I was a kid, I had a toy parrot that repeated everything you said, and I called it Uncle Feather. I wonder what happened to that thing. Oh well. 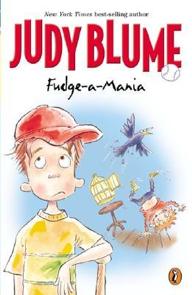 Fudge is back and driving his brother Peter crazy, as usual. This five-year-old human hurricane is more trouble than ever. His latest plan is to marry Peter’s sworn enemy, Sheila Tubman. But Peter’s problems are about to get worse. His parents have decided to share a summer house in Maine with the Tubmans. And Peter will be stuck with Fudge and Sheila for three whole weeks!

As I said before, this one is my favorite book in the series and the funniest one in the whole series, in my opinion anyway. I probably listened to it on cassette a hundred times as a kid. This book has the best stories and the best quotes out of all the other books. From “Big Bird’s not married!” to “Person overboard!” every word in this book is comedy gold. 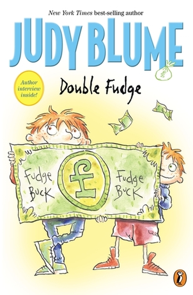 Double Fudge (First Published 2002)
“I love money,” is 5-year-old Fudge’s new theme song. He’s going to dress as a miser for Halloween and has made big plans to buy the entire world (or at least Toys R” Us). Fudge’s new obsession with cash is driving his older brother Peter crazy! But life really spins out of control when Peter and his family run into their long-lost relatives, the Howie Hatchers of Honolulu, Hawaii. Now Peter has to deal with Flora and Fauna, his annoying twin cousins who burst into song at the drop of a hat, and their weird little brother, coincidentally named Farley Drexel Hatcher-just like Fudge. Their names aren’t the only similarity, and before long, mini-Fudge is causing just as much trouble as Fudge always has.

I own this book on cassette and have listened to it at least a hundred times.

Something you should know about these books is that they don’t seem to be set in a specific time period. In the first book, Peter is in 4th grade, and in the fifth book, he’s in 7th grade, so the books span about 4 years. The first book, supposedly, takes place in 1972, so the fifth book must take place in 1976/1977. Right? WRONG! The fifth book was published in 2002 and contains information that would not be available in the 1970s. That thing is Harry Potter. The first Harry Potter book wasn’t published until 1997, so how is Fudge reading the first Harry Potter book in 1976? I know I’m making a big deal out of this, but I think it’s interesting.

This book also inspired me to visit Washington D.C. to see the Bureau of Printing and Engraving for myself (it’s worth seeing).