Like the ‘Moon Base Alpha’ series, I’ve been meaning to read these books for a while. Now that I have, I’m glad I waited for more books to come out so I could read them all at once. When I found out that the fourth book ‘Panda-monium,’ was coming out on April 4, 2017, I decided I should read the first three books so I’d be ready to read the fourth one when it comes out. I know I make a big deal about reading series all at once, but that’s just how I am.

Can you call it homicide if the victim is…a hippo?

Teddy Fitzroy is in over his head. Living at FunJungle, America’s newest theme park, was supposed to be nothing but fun. But now Henry the Hippo, the park’s mascot, has turned up dead, and Teddy suspects foul play. Unfortunately, plenty of people wanted Henry gone – and the list keeps growing. As Teddy searches through all the clues and asks too many questions, it becomes clear that he too might end belly up.

This book goes into detail about how zoos work or, in this case, how an amusement park/zoo works. FunJungle does seem impressive, in theory, but they don’t seem to have much control over what goes on there. By that, I don’t mean the animals. I mean the tourists. The tourists throw trash into the habitats and bang on the glass of the exhibits. Humans are more out of control than animals.

The strangest thing about this story is how involved the parents are in Teddy’s adventure. In most stories, the parents either don’t believe the kid or are completely useless. It was a nice change of pace. Teddy’s parents are incredibly cool. His mom is a modern-day Jane Goodall, and his dad is an adventurous photographer.But don’t worry, there are plenty of other useless dumb adults in this book.

Cool Fact about Hippos: Hippos are the second most dangerous African animals. (Water buffalos are the first).

As a bonus, here’s a picture of a hippos and a baby hippo: 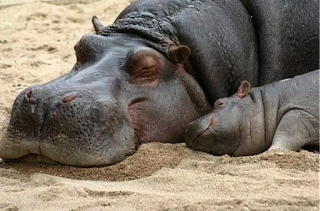 Kazoo the koala is missing!

And Teddy Fitzroy is the primary suspect. The only way Teddy can clear his name is to creak the case and bring Kazoo back home to FunJungle, where he belongs, all while steering clear of Vance the bully. Otherwise, Teddy will be shipped off to juvie as a convicted koala-napper.

In this story, Teddy has to deal with two bullies. Vance, a 15-year-old eighth-grader who has had it out for Teddy since he got to school, and Marge, a security guard that’s had it out for him since he got to FunJungle. I don’t know what’s worse, a middle school bully or an adult bully. Middle school bullies seem to have a way of finding the thing you’re insecure about and torturing you with it. Adult bullies are the same, but they’ve had years to perfect it.

FunJungle’s staff is full of misfit criminals and incompetent morons. The security system is corrupted by idiot adults who spend most of the book chasing Teddy instead of actually doing their job and finding the real culprit. And while chasing Teddy, they don’t care who they hurt in the pursuit of him. Stuart Gibbs really knows how to create idiotic adults who question your faith in humanity. FunJungle has many experts on animals and expert vets, but the morons seem to outweigh the smart people.

They only talk about this next subject for two pages, but I want to give my opinion on it. When Teddy and his parents discussed why someone would steal a koala, the idea that someone would want one as a pet came up. I can kind of understand that. Koalas are adorable, but it’s still a foolish idea. And that’s just one type of exotic animal people try to keep as pets. People are actually stupid enough to think they can own animals like tigers, lions, leopards, bears, chimps, zebras, etc. Who in their right mind thinks owning a tiger, an animal that can easily kill you, is a good idea?

Cool Fact about Koalas: Koalas rest 16 to 18 hours a day and spend most of that unconscious. In fact, koalas spend so little time thinking that their brains actually have shrunk over the last few centuries. The koala is the only known animal whose brain only fills half of its skull.

As a bonus, here’s a picture of a koala with a butterfly: 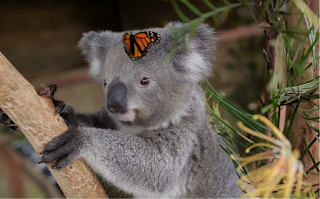 Teddy Fitzroy has caught a lot of bad guys at FunJungle, but when someone takes a shot at Rhonda Rhino from insidethe park, he finds that this might be his most challenging case yet. Now Teddy has to catch the hunter and save Rhonda – while trying not to become animal chow.

The main theme in this book is poaching. In a nutshell, humans are killing rhinos because they think that rhino horns have curative powers when there’s no scientific proof of that at all. In fact, rhino horns are only made of keratin, the same stuff as our fingernails. The whole thing is completely pointless and idiotic. Entire subspecies of rhinos have been wiped out in the wild, while the others are barely hanging on. I cannotunderstand why anyone would kill such a wondrous animal. Maybe it’s just me, but I don’t see the need to kill a creature that’s just minding its own business. And who hunts an animal from inside a zoo? What makes it worse is that I recently found a video on Facebook about someone who actually shot a rhino from inside a zoo. I couldn’t read the article. It was too horrible.

Cool Fact about Rhinos: Rhino pregnancies last 16 months, only one baby is born at a time, and it takes at least another year to wean them. That means it can be 3 to 4 years between births, which is very slow for an endangered species.

As a bonus, here’s a picture of two rhinos: 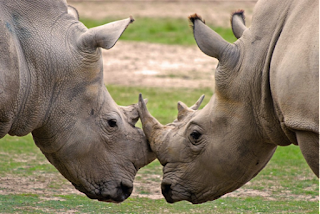 Li Ping the Panda had been kidnapped.

FunJungle is awaiting the arrival of its most thrilling animal yet – a rare and very expensive giant panda. But when the trucks transporting Li Ping show up, its precious cargo has vanished into thin air. The FBI steps in to investigate, and Teddy is happy to leave the job in their (supposedly) capable hands. But when someone blackmails Teddy into working the case, his involvement in this mystery is no longer black-and-white.

Stuart Gibbs starts this book off with the most embarrassing situation I have ever read. And I have read a lot of books with many awkward situations, so that saying something. It’s like Gibbs thought to himself, ‘How can I humiliate Teddy in the most embarrassing way in the history of embarrassment?’ and actually accomplished it. Trust me. It’s pretty bad.

For the first time in the book series, real professionals are brought in to solve the crime. And you just know that Teddy is going to show them up by solving it first. That’s just obvious. That’s how this whole book series works. The adults stick to the wrong set of clues while he sees the one clue they missed. The real question is how bad the professionals are going to take it when a thirteen-year-old boy does what they couldn’t.

If you enjoy this book, check out the new Disneynature Born in China, which features a family of pandas.

Cool Fact about Pandas: Pandas have been on earth for 2 to 3 million years and are considered ‘living fossils’ because many of the species they coexisted with are now extinct.

As a bonus, here’s a sweet picture of a panda in a tree: 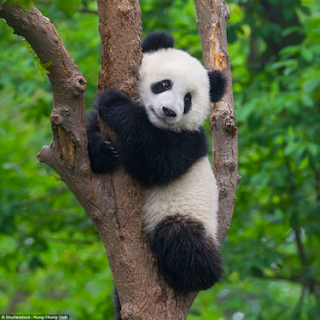 I found out that a fifth FunJungle will be released in the spring of 2019. If I’m still writing this blog in 2019, I’ll review it.