The Girl I Used To Be by April Henry

The Girl I Used To Be by April Henry
High School 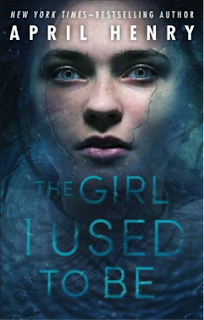 When Olivia’s mother was killed, everyone suspected her father of murder, but his whereabouts remained a mystery. Fast-forward 14 years; new evidence now proves Olivia’s father was actually murdered on the same fateful day her mother died. That means there’s a killer still at large and it’s up to Olivia to uncover who that may be. But can she do that before the killer tracks her down first?
I’ve read a couple of books where the main character finds out one of their parents is a killer but I’ve never read a story where the parent was thought to be the killer but turns out to be a victim. That’s a new one. It’s always nice when the authors mix it up.
I’ve read many books where the teenage female main character spends most of the story complaining/whining and being a brat about something.
Examples: Complaining that the love of your life is a vampire (Twilight by Stephenie Meyer), complaining that your older sister is hotter than you (All-American Girl by Meg Cabot), complaining that you don’t have your cellphone during the end of the world (The Rain by Virginia Bergin), stupid stuff like that.
Olivia on the other hand has every reason to complain. For 14 years she’s thought her own father killed her mother in a horrific way and she’s been bounced around from foster home to foster home. She does complain a little but she’s doesn’t spend the entire story complaining. She actually does something unlike some female character I’ve read about.
You might or might not have noticed a recurring theme in each of April Henry’s books; strong female characters put in horrifying and deadly situations. I’ve read many books that had strong female characters but the girls kept getting off topic by talking about boys and feelings. I used to like this but then I got a boyfriend and realized boys aren’t as ‘charming’ as those books made them out to be. April Henry’s girls are always focused on the big picture and they wait until after the dangerous situation is over before thinking about romance.
Well that’s the last of April Henry’s books. I hope you all enjoyed it.
0 Comments
0 Likes