‘The Grimm Legacy’ Series by Polly Shulman
I read ‘The Grim Legacy’ back when I was in high school and I just loved it. I didn’t find out there where two other books until years later. The first thing you should know it that the main character change with each book. One character that shows up in each book is Mr. Rust, the Head Repositorian of the New York Circulating Material Repository. And keeps your eyes and brain open for some familiar characters from the past books.
12 and Up 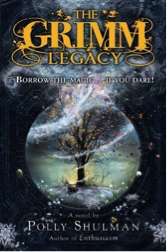 The Grimm Legacy (The Grimm Legacy, #1)
What if fairy tale magic really existed? Elizabeth, an ordinary girl, takes a not so ordinary job at the New York Circulating Material Repository. But the repository is no ordinary library: It lends out objects rather than books – everything from tea sets and hockey sticks to Marie Antoinette’s everyday wig.
It’s also home to the Grimm Collection, a secret room in the basement. That’s where powerful items straight out of the Brothers Grimm fairy tales are locked away. When the magical objects start to disappear, Elizabeth and her new friends embark on a dangerous quest to catch the thief before they’re accused of the crime themselves – or the thief captures them.
Best after school job ever! I want this Circulating Material Repository to be a real thing!
You’ll notice when the characters talk about the fairy tales that it’s not all dancing animals and singing princesses. The real Grimm stories are actually a lot more horrifying than Disney portrays them. The story also mentions a lot of fairy tales you probably never heard of before. If you want to learn more, try your local library or maybe try online. 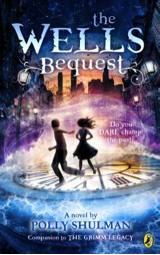 The Wells Bequest (The Grimm Legacy, #2)
What would you do with a time machine? When a miniature time machine appears in Leo’s bedroom, he has no idea who the tiny, beautiful girl is riding it. But in the few moments before it vanishes, he recognizes the other tiny rider: himself!
His search for the time machine, the girl, and his fate leads him to the New York Circulating Material Repository. Hidden away in the Repository basement is the Wells Bequest, a collection of powerful objects straight out of classic science fiction. But when Leo’s adventure turns deadly, he must attempt a journey to 1895 to warn real-life Nikola Tesla about a dangerous invention.
As Ron Stoppable from the hit Disney Channel show ‘Kim Possible’ once said, “Time travel, it’s a cornucopia of disturbing concepts.” And this book proves it. There will be many discussions about time travel in this story that will make your head spin. All I can say about time travel is ‘Don’t try to understand it’. There is one scene that is kind of like a time travel soap opera; you’ll probably have to read this scene a couple of times to understand what’s going on.
And just a heads up, this book takes place a few years after ‘The Grim Legacy’ and the main characters from that book don’t work there anymore. But one of the main character’s sister is now working at the Repository. I’m telling you this because it took me till Page 65 to figure it out.
Be sure to read the ‘Note to Readers’ and the ‘Librarian’s Note’ at the end of the book. 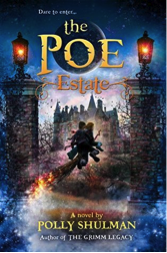 What if your family’s ghosts wouldn’t leave you alone? Sukie’s been lonely since the death of her big sister, Kitty – but Kitty’s ghost is still with her. At first that was comforting, but now Kitty’s terrifying anyone who gets too close, especially cute boys like Cole. Things get weirder when Sukie moves into her family’s ancestral home, and an older, less familiar ghost challenges her to find a treasure. Fortunately, an antique broom’s at hand to fly Sukie and Cole to the New York Circulating Material Repository’s spooky Poe Annex.
I’ll be honest with you people; this book was a huge disappointment. I thought it was going to be all about Edgar Allan Poe but they just kept talking more about other authors. The authors mentioned are writers of classic ghost and horror stories like Edgar Allan Poe wrote. But come on! If you’re going to write a book titled ‘The Poe Estate’ maybe you should actually write about Edgar Allan Poe. The whole story was just Ugh!
If you’ve enjoyed this series, check out the TV series ‘Warehouse 13’ and ‘The Librarians’. I know this is a book blog but I’m making an exception here. Personally the shows are better than these books.
Also, I don’t know if Polly Shulman plans to write another book about another section of the Repository but if she does I hope to review it.
0 Comments
0 Likes

One for the Murphys by Lynda Mullaly Hunt