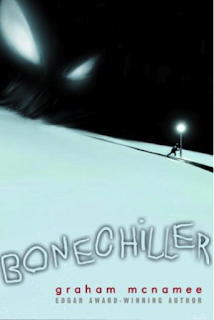 Harvest Cove, a tiny town tucked away in Canada’s Big Empty, is the latest nowhere place Danny’s dad has dragged
him to. If you’re looking for somewhere to hide, this is it. It’s the worst winter in years. One night, walking home in the dark, Danny is attacked by a creature so strange and terrifying he tries to convince himself he was hallucinating. Then he learns about Native American legends of a monster that’s haunted the lake for a thousand years. And that every generation, in the coldest winters, kids have disappeared into the night. People think they ran away.
Danny knows better…because now the beast is after him.
Graham McNamee’s second book doesn’t disappoint. Out of all of his books, this one is the most suspenseful and the most bone chilling (just like the title says). I read this in high school and I had a very hard time putting it down.
In his first psychological horror, he created a serial killer monster. But in this story, he creates a supernatural monster that will keep you up at night. I’ve read many books about terrifying and scary monsters, but Bonechiller, to this day has one of the most horrific monsters I’ve every read about.
0 Comments
0 Likes