Count All Her Bones by April Henry 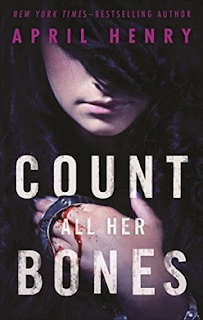 Six months ago, Griffin Sawyer meant to steal a car, but he never meant to steal the girl asleep in the backseat. Panicked, he took her home. His father, Roy, decided to hold Cheyenne―who is blind―for ransom. Griffin helped her escape, and now Roy is awaiting trial.
As they prepare to testify, Griffin and Cheyenne reconnect and make plans to meet. But the plan goes wrong and Cheyenne gets captured by Roy’s henchmen―this time for the kill.
I really regret not waiting for this book to come out before I posted the April Henry books. It would’ve worked great for my October suspense/horror marathon of books. But I did not. So, here’s the book now.
Once again, I can’t tell you much without giving too much information away about the first book and this book.
Unlike the first book, this story shows the point of view of Cheyenne, Griffin, Roy and TJ. I haven’t read the first book in a while so I forgot who TJ was until his part in the book. Pretty much he was one of the men who kept Cheyenne captive and he’s insane.
I’m going to be honest with you all, this book was a disappointment. More to the point, Cheyenne was a disappointment. April Henry’s books are usually filled with female characters that are strong and usually have a love interest but don’t spend the entire book talking about them. In the last book, Cheyenne was scared but strong in a terrifying situation. Now she can’t stop thinking about Griffin, the boy who kidnapped her in the first place. It was an accident but still, it was his fault. This whole book screams Stockholm syndrome.
But don’t get me wrong. This is still a great book. It had me on the edge of my seat after Cheyenne made her horrible decision. I read over half the book in one sitting. I love it when a book just draws you in and won’t let go.
0 Comments
0 Likes

Pi in the Sky by Wendy Mass