The Matchstick Castle by Keir Graff

The Matchstick Castle by Keir Graff
5th Grade and Up 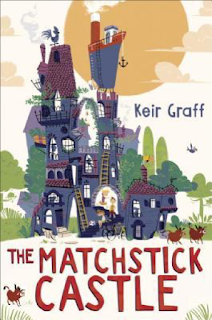 Brain can think of a few places he’d rather spend his summer than with his aunt and uncle in Boring, Illinois. Anything would be better than doing summer school on a computer while his scientist dad is stationed at the South Pole.
Boring lives up to its name until Brain and his cousin Nora find a huge, wooden house in the forest. With balconies, turrets, and windows seemingly stuck on at random, it looks ready to fall over in the next stiff breeze. To the eccentric family that lives inside, it’s not just a home — it’s a castle.
Suddenly, the summer gets a lot more exciting. With their new friend Cosmo, Brain and Nora tangle with giant wasps, sharp-tusked wild boars, and a crazed bureaucrat intent on bringing the dangerously dilapidated old house down with a wrecking ball.
This book reminds me of the many summer movies I watched as a child, movies where the kids save the day by taking on ‘The Man’ while doing a bunch of crazy stuff too.
Brain’s uncle has created a computer program called ‘Summer’s Cool’ and long story short, plans to mass-produce it so children can do school work all year round. So, he plans on becoming hated by children all around the world. Look, I understand that kids forget more than half of what they learned over the summer and the program could be used for kids who don’t fit in with the normal school environment. BUT SCHOOL YEAR-ROUND! THAT’S TORTURE!
This story features three very different households. Brain’s family includes his mother, father and two older brothers. They usually eat with paper plates and do laundry once a mouth. Nora’s family includes her mother, her father and herself. Nora’s father is very strict and has rules about everything. He has his daughter and nephew doing school in the middle of summer for Pete sakes. Cosmo’s family is very chaotic. It’s hard to say just how many family members he has. This story shows that many households are different and being forced into an environment that you’re not used to can be hard.
Cosmo grew up in a family that allows him to learn stuff for himself and treat him like an equal instead of a kid. Nora on the other hand is forced to learn what her father wants her to learn and treated her like a lab rat for his ‘Summer’s Cool’ program. It’s true that you should think about your future and that you can’t be a kid forever, so be a kid while you can.
The author has a childlike spirit that radiates from every word. I feel like only a kid could write something like this. Mostly because only a child could come up with the design for the Matchstick castle. The best way to describe it is if a bunch of elementary school kids designed a house, coming up with every crazy idea they could think of, and then built it themselves. If someone created a children’s show featuring this house I would definitely watch it. When thinking about the Matchstick Castle, the song ‘Funhouse’ from ‘Phineas and Ferb’ pops into my head. I could make a very long list of all the exciting and fun things inside the castle but I don’t want to say too much about because it’ll ruin the wonder.
I recommend this book to fans of a good old fashion summer vacation adventure.
1 Comment
0 Likes

Yahooty Who? by Jen Oloo

What’s on Your Plate: Exploring the World of Food by Whitney Stewart

Lion Down (FunJungle #5) by Stuart Gibbs