‘Moon Base Alpha’ Series by Stuart Gibbs
HAPPY 50TH POST! WHOO-HOO! YAY! WOO!
And to celebrate, here is an ‘out of this world’ series that everyone should read!
Middle School 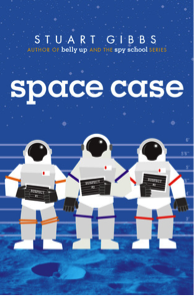 You wouldn’t think it, but being one of the first people to live on a moon colony isn’t all it’s cracked up to be. You’re stuck inside a small base with only a few other kids, and you’re not even allowed to go for a low-gravity romp on the moon’s surface. What the point?
But 12-year-old Dashiell Gibson’s life gets a jolt when a top lunar scientist turns up dead. Dash suspects foul play, but no one believes him. Is there a moon maniac on the loose? And what is he or she trying to hide?
I’ve been meaning to read Stuart Gibbs’s books for a while now but haven’t had the time. I’m glad I found these books on audio so now I can listen to them while I work. I’m especially glad because these books are great!
Let’s start by saying that this book takes place in the year 2041 and that space travel isn’t all it’s cracked up to be. I wouldn’t do it. Then again I wouldn’t do a lot of things so that’s not saying much. The work that’s being done on Moon Base Alpha sounds amazing and living on the moon sounds amazing too. But the living conditions aren’t great. Dashiell’s description on how to go to the bathroom in space is absolutely hilarious.
The living conditions of space are only half the story. The other half is the murder mystery. Killing someone in space is
completely stupid, of course you’re going to be suspected and of course you’re going to be found out.
Building a space colony on the moon, to me, is completely stupid. It is so like humans to mess up the planet we already have and then go to the moon and mess that up too. I think people are already planning to do that on Mars. I think they are, I have no idea what’s going on in the world and I don’t feel like going online to figure it out. 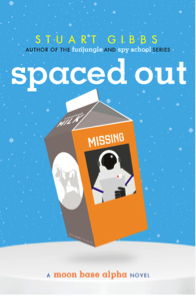 There’s nowhere to hide on the world’s first moon base. After all, it’s only the size of a soccer field. So when Nina Stack, the commander of Moon Base Alpha, mysteriously vanishes, the Moonies are at a total loss.
Though he may be just 12-years-old, Dashiell Gibson is the best detective they’ve got. But this confusing mystery pushes him to his limits. Especially since he has his own huge secret to protect. With the fate of the entire human race hanging in the balance, will Dash be able to solve the mystery of the missing Moonie?
I can’t tell you much about the plot of this story without spoiling the big surprise from the first book. Let’s just say it’s a big one and it makes these stories even better.
Both books are a cross between a soap opera and a space version of Clue. I’m actually surprise there isn’t a space themed sitcom. I’d watch that. I feel like this whole setup would make good reality TV, like a sci-fi version of Survivor. The concept would be that they put 20 people on the moon base and see who crakes first. Then again that’s kind of what this book is.
After listening to these books I’m even more excited to watch the movie ‘The Space Between Us’. The movie’s about the first human born on Mars and how he travels back to Earth. The movie was suppose to released back in August but instead is releasing on December 16, 2016. Check it out.
To learn more about space toilets and have a good laugh, check out Season 2, Episode 22 (The Classified Materials Turbulence) of ‘The Big Bang Theory’. If you like stories about kids living out in space, check out the Disney Channel Original Movies ‘Zenon, Girl of the 21st Century,’ ‘Zenon: The Zequel,’ and ‘Zenon Z3’. If you like stories about murder mysteries involving space, check out Season 7, Episode 16 (The Wrong Stuff) of ‘Castle’.
Be sure to read the ‘Acknowledgment’ at the beginning of each book. I don’t know when Stuart Gibbs plans to write another ‘Moon Base Alpha’ book but I hope he does soon.
1 Comment
0 Likes

What To Do With A Box by Jane Yolen & Chris Sheban

I Survived the Great Molasses Flood, 1919 by Lauren Tarshis