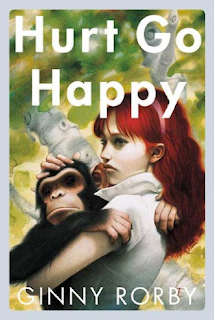 This story stars 13-year-old Joey Willis, who is used to being left out of conversations. She’s been deaf since the age of 6 and Joey’s mother has never allowed her to lean sign language. She strains to read the lips of those around her, but often fails.
Everything changes when Joey meets Dr. Charles Mansell and his baby chimpanzee, Sukari. Her new friends use sign language to communicate and Joey secretly begins to learn to sign. But as Joey’s world blooms with possibilities, Charlie and Sukari’s choices begin to narrow until Sukari’s very survival is in doubt.
After 22 years of reading it’s rare that I get to read about a subject that I haven’t read about before I’ve read so many books about so many things. I did read a graphic novel about Cece, a girl who was deaf, ‘El Deafo’ by Cece Bell. But unlike Cece, Joey wasn’t given as much help and lost her hearing in a terrible way.
This book was written by Ginny Rorby, the same women who wrote ‘How to Speak Dolphin’ a great book that I’ve reviewed before. Ginny Rorby writes again about a kid with a parent who wants their kid to magically be normal. Joey’s mom, Ruth, is the worst kind of parent a kid with a difference can have; the kind of parent who is embarrassed by their kid’s difference and wants to hide it even if it means not helping their kid. Ruth doesn’t want Joey to learn to sign and gets angry anything someone brings it up. She thinks by keeping Joey from signing she’s helping her be normal and blend in. That’s ridiculous! If her daughter can’t communicate with people how is she going to get through life?!
I’m not saying you shouldn’t read this book. It’s a good story and it shows that not all parents deserve to have a special child.
1 Comment
0 Likes

Behind the Canvas by Alexander Vance

I Survived the Battle of D-Day, 1944 by Lauren Tarshis