Anyone who wants to learn about true heroes 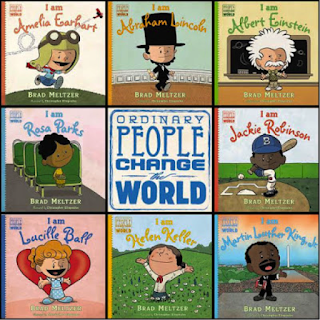 Amelia Earhart was the first woman to fly across the Atlantic Ocean. She knew no bounds.

Abraham Lincoln lost four elections before being elected president. He believed all people were created equal.

Albert Einstein won the Nobel Prize in physics. He never stopped being curious.

Rosa Parks didn’t give up her seat on the bus and inspired the Montgomery Bus Boycott. She stood up for what was right.

Jackie Robinson played his first official baseball game for the Montreal Royals on April 18, 1946. He led the way by setting an example.

Lucille Ball, the star of I Love Lucy, won four Emmy awards in her lifetime. She was always true to who she was.

Helen Keller was the first deaf and blind person to earn a college degree. She never let anything stop her.

Martin Luther King, Jr.’s methods of nonviolence were so powerful, he was invited to meet with the president at the White house. He believed that if we stand together, nothing could stop our dream.

Every one of them was an ordinary person. But ordinary people can change the world.

These books are absolutely adorable. These are the kinds of books I wish were around when I was a kid. I would have collected every single one of them. I want them all now, and I’m an adult. Well . . . kind of.

This is such a fun way to learn about history. Each book has a fantastic story to tell. The stories show these amazing people as children and are still shown as children throughout the entire book. That confused me a bit, but I realized it is like this to show kids that these heroes were once kids just like them.