Paperboy by Vince Vawter
11 and up 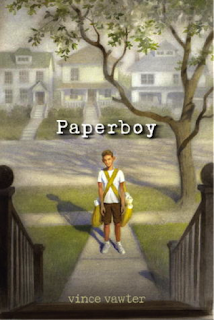 This book is about an eleven-year-old boy who lives in Memphis in 1959. He can throw the meanest fastball in town but he can barely say a word without stuttering – not even his own name. So when he takes over his friend’s paper route, he knows he’ll be forced to communicate with the customers, including a house-wife who drinks too much and a retired merchant marine who seems to know everything.
The paper route poses challenges, but it’s a run in with the neighborhood junkman, a bully and a thief, that stirs up trouble.
I had to look some things up to really understand this story. I watched a video of kids who stutter so I could understand how they sound. The thing I was more curious about is what causes stuttering.
While I was talking about this book, I realized just how difficult it is must be for this boy. I can talk so easily but he has to think about every single movement his mouth makes and the sound that comes out. When I talk, I don’t think about that stuff, I just do it.
It’s interesting all the tricks he uses to speak. And the situations where he doesn’t have too much trouble speaking. I don’t know why but I had a hard time wrapping my mind around this particular ‘difference’.
0 Comments
0 Likes

Lost and Found by Andrew Clements