She Is Not Invisible by Marcus Sedgwick

She Is Not Invisible by Marcus Sedgwick
Here is the start of my list on books about blindness followed by a list of books by one of my favorite authors, April Henry.
Please enjoy! 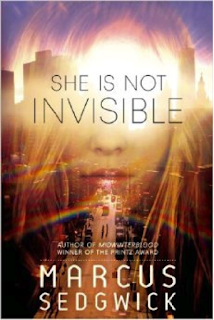 Laureth Peak’s father has taught her to look for recurring events, patterns, and numbers – a skill she’s remarkably talented at. When he goes missing while researching coincidence for a new book, Laureth and her younger brother fly from London to New York and must unravel a series of cryptic messages to find him. The complication: Laureth is blind. Relying on her other senses and on her brother to guide her, Laureth finds that rescuing her father will take all her skill at spotting the extraordinary, and sometimes dangerous, connections in a world full of darkness.
The number one thing I like about this book is that it doesn’t go too much into Laureth’s blindness. They only talk about in the first chapter and then it’s on to other things. And when they did talk about it, they didn’t say anything like ‘how hard it is not being able to see’ or ‘how her life was so difficult’. Nope. They talked about how other people treated her for being blind, how they would stop talking to her after they found out. To me, that is the stupidest thing ever. She’s still the same person you were talking to three seconds ago; she just can’t see your stupid face.
The true beauty about Laureth is that she was born blind and wasn’t actually sad about not being able to see. You can’t miss what you never had. And in a small sort of way, it might be an advantage. If you can’t see the person, you can’t judge them by the way they look.
The story’s plot mostly goes into the details of a coincidence, which I found very weird. Laureth’s father was writing a book about the science and junk behind a coincidence and I honestly didn’t understand how someone could write a book on the subject. I mean, if the book was just a collection of odd and unbelievable coincidence stories I might be more interested. Which, ironically, this story kind of is.
Even though I didn’t fully understand the coincidence part of the story, this is still one of the best books I’ve ever read.
0 Comments
0 Likes

‘Woof’ and ‘Arf’ (Bowser and Birdie Novels) by Spencer Quinn

The Last Human by Lee Bacon