August (Auggie) Pullman was born with a facial deformity that prevented him from going to a mainstream school – until now. He’s about to start 5thgrade at Beecher Prep, and if you’ve ever been the new kid, then you know how hard that can be. The thing is, Auggie’s just an ordinary kid with an extraordinary face. But can he convince his new classmates that he’s just like them, despite appearances?

If you haven’t heard of this book, you’ve been living under a rock for the past few years. I actually didn’t read this book right away. I probably had other books I was reading at the time. I got lucky and found it on audio at the library and fell in love with this story. You’ve probably guessed from reading this blog that I have a habit of reading books about kids with ‘differences.’ (I discovered the term ‘differences’ after reading ‘Fish in a Tree’ by Lynda Mullaly Hunt, and I like this term more than ‘quirks’ or ‘disabilities.’) I have read stories about autism, dyslexia, cerebral palsy, hearing impairment, blindness, spinal muscular atrophy, stuttering, port-wine stain, OCD, losing a limb, (the last three will be featured in future posts), etc. I love learning about people with differences because they live such exciting lives. No one wants to read about someone with a boring life.

I don’t know what would be harder; having the thing that’s different about you right out in the open for everyone to see or having the thing that’s different about you inside your mind where people can’t see it. As someone who has their difference inside their mind, it’s pretty hard to get help when the problem is inside your own head. On the other hand, Auggie has his difference right on his face for everyone to see. But you can’t have your difference be the one thing that defines you.

The thing I liked most about this book is how we get to see through the point of view of so many people and how they all react differently to Auggie’s face. I honestly don’t know how I would react to a face like Auggie’s. I did see this one kid at Disneyland once whose face was odd, and I just thought, ‘What’s that kid’s story? What’s his life like?”

Throughout the book, the one thing that scared me was the surgeries Auggie had to go through. He’d been through more surgeries and pain in the first 10 years of life than most people do in their entire lives.

Auggie might have an odd face, but he has a loving and supportive family. It proves that what you lack in one thing, you make up for in something else. Because no one can have it all. Auggie’s character is sweet and adorable in his own way. Never judge a person by the way they look. This book teaches the power of being kind. So be kind, always choose kind.

Auggie & Me is a new side to the Wonder story; 3 new chapters from 3 different characters – bully Julian, oldest friend Christopher and classmate Charlotte – give an insight into how Auggie has touched their own lives.

The Julian Chapter: I don’t want to give too much away, but there is a reason why Julian bullied Auggie. It’s not a good reason, but it’s still a reason. It wasn’t Julian’s fault, and it wasn’t Auggie’s fault either. Julian just had some inner demons he didn’t know how to handle. But after his experiences with Auggie, I think he’ll become a better person.

Pluto: A Wonder Story: I honestly can’t relate to the friendship side of this story because I don’t really have friends, more like acquaintances. I watch so many shows about friendship, but it’s still something I can’t seem to grasp. My favorite part of the story is when Christopher visits Aggie in the hospital. He gives his toy to another sick kid who was there all alone. I love random acts of kindness.

Shingaling: A Wonder Story: Honestly, Charlotte wasn’t as great as the other side characters. Her side of the story was just about how many of the neutral students felt about the war between Aggie and Julian, and she’s really not that interesting compared to everyone else in the story.

Here are 365 precepts – words to live by – that will enlighten, engage, inspire, comfort, and challenge readers every day of the year. There’s something for everyone here, with words of wisdom drawn from popular songs, great works of literature, inscriptions on Egyptian tombs, fortune cookies, characters who appeared in Wonder,and over 100 readers, who sent R.J. Palacio their own precepts.

I was lucky to be able to buy this book, and I’m glad I did. This book is full of great quotes and sayings. I feel like this book adds another layer to have a fuller life. By reading a few simple precepts, it makes you think deeper about life: Here are a few I liked the most:

Be kind, for everyone you meet is fighting a hard battle. – Ian Maclaren
Just be who you want to be, not what others want to see. – Unknown
Normal is a setting on a washing machine. – Unknown

If you’re lucky enough to be different, don’t ever change. – Taylor Swift 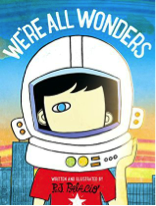 Wonder has inspired a nationwide movement to Choose Kind. Now parents and educators can introduce the importance of choosing kind to younger readers with this gorgeous picture book, featuring Auggie and Daisy on an original adventure, written and illustrated by R. J. Palacio.

This is an extremely sweet children’s book that introduces young readers to Auggie’s world and to always choose kind when meeting someone new.

The reason why I waited so long to review this book was because I wanted to post this a few months before the movie came out. THAT’S RIGHT! ‘WONDER’ IS GOING TO BE A MOVIE! It’s coming out November 17, so anyone who hasn’t read the book yet has over 5 months to do so! I’m so excited! The only bummer is that the boy playing Auggie Pullman is just a plain-looking boy wearing a costume. I think that’s unfair and untruthful. I feel like they should have found someone who actually has an extraordinary face. And they didn’t even make Auggie look right; they made him too regular-looking. I’ve seen kids in real life who look odder than they make this kid look.

Side note: Click on the YouTube link below to be taken to a truly inspiring video starring some real-life ‘Auggie Pullmans.’