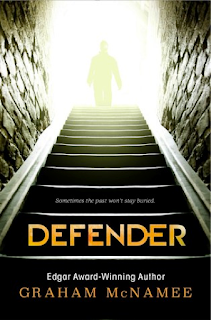 Tyne Greer is six foot six; a high school basketball star who is hoping the game will be her ticket out of the slum. She lives in a run-down building called The Zoo, where her father is the superintendent. One day she discovers a crack in the wall of an abandoned basement room. And sealed up in the wall is a girl’s body. Horrified, she runs to get her dad. But after he goes to take a look, he comes back and tells Tyne that nothing’s there. No girl. No body.
Tyne is sure it was real and when she finds evidence that the body was moved from the hole in the wall, she knows the only one who could have done it is her father.
But why?
What is her dad hiding?
When I first found this book I didn’t realize Graham McNamee wrote it until later, I didn’t know he was working on another book.
Graham McNamee has taken a whole new step to scare his readers. He’s done serial killers (Acceleration), he’s done monsters (Bonechiller), he’s done serial killers with monsters (Beyond), but now the psycho killer just might be the father. How scary is it to think that your own father is lying to you about something like that.
Graham McNamee once again creates incredible and smart-mouth characters to bring humor to this nail-biting story. The character who brings the most comedic effect is Tyne’s boyfriend, Stick, a boy with a huge appetite and no matter how much he eats he still remains a ‘stick’. The dialogue between Stick and Tyne is hilarious and I loved every conversation the two had. I wish my boyfriend and I talked to each other like they do.
And…that’s all four of Graham McNamee’s books. I don’t know if he’ll write another one but if he does I hope to write a review about it.
Well, this is my last October post. I hope you enjoyed it. These books prepared me for future books even more disturbing than the ones I’ve written about. I won’t write posts for those books, I don’t want to scar anyone who can’t handle it. I would know, I used to be that person. I still am at times. If you’re interested in more disturbing books you’ll have to find them yourself.
0 Comments
0 Likes

The Boy on the Porch by Sharon Creech