Finders Keepers by Shelley Tougas
Grade 4 and Up 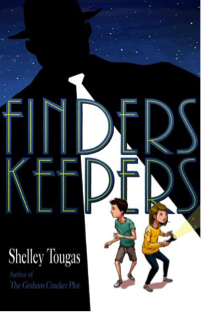 In Wisconsin, 10-year-old Christa and 11-year-old Alex team up to search for the lost treasure of Al Capone near where Alex has just moved into his grandfather’s house and Christa is spending what may be her family’s last summer in their cabin.
Let’s start with a little history lesson about Al Capone:
Al Capone was an infamous leader of the Chicago mafia during the Prohibition era. The Prohibition era was a time when it was illegal to make and sell alcohol in the United States. It’s a shame that the law wasn’t permanent. In short, Al Capone was a gangster who made a fortune bootlegging whiskey.
When I began reading this book I was confused about why Al Capone was rumored to have money in Wisconsin when he worked in Chicago. I’m not that smart when it comes to history or geography, so I did some research online. It turns out that Al Capone actually had a hideout in Wisconsin. Apparently, Wisconsin was popular among Chicago-based gangster for its isolation.
Alex’s grandfather, who is called ‘Grumpa’ by Christa, kind of reminds me of Grunkle Stan from ‘Gravity Falls’. There is even a part of the story where he scares the kids, laughs too hard, coughs and thumps his chest, just like Grunkle Stan in the pilot episode.
What made this story unique were the imaginary play adventures Christa and Alex pretended to go on. Christa’s imagination is amazing. I wish I could have been that imaginative as a child.
I kept getting annoyed whenever someone told Christa to ‘grow up’ or ‘you’ll understand when you’re older’. It reminded me of this Frazz comic:

That seems to be what everyone is telling Christa to do and that’s unfair. You can’t force someone to be mature. Everyone’s just trying their best to live through life the only way they know how.
0 Comments
0 Likes

A Boy and a Jaguar by Alan Rabinowitz

What a Waste! Where Does Garbage Go? by Claire Eamer